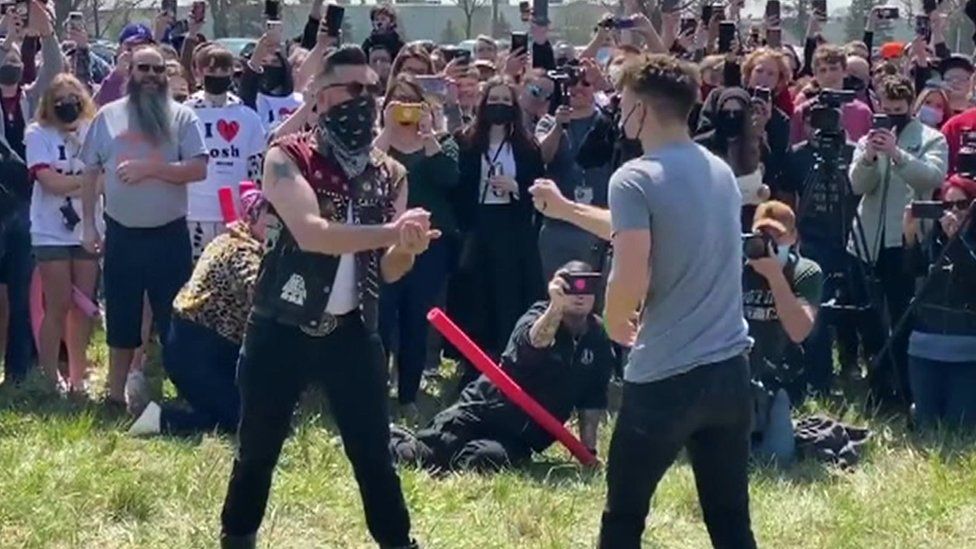 Hundreds of people have gathered in a US park, armed with pool noodles, to take part in a friendly battle over the right to use the name Josh.

Last April, Arizona student Josh Swain, 22, jokingly messaged dozens of people who shared his name, and challenged them to a fight.

A year later, dozens of people called Josh arrived in Lincoln, Nebraska, to battle for the popular name.

The event began with “an epic contest of rock, paper, scissors” between organiser Josh Swain and another Josh Swain from Omaha, said Yousef Nasser, a reporter with local broadcaster KLKN, who filmed the battle. The Arizona Josh won the contest.

The subsequent pool noodle fight was open to anyone with the first name Josh. Dozens of Joshes – some wearing Spider-Man costumes and others in Jedi robes – tried to hit one another with the noodles, as a large crowd of cheering supporters looked on.

In the end, four-year-old Josh Vinson Jr, nicknamed Little Josh, was crowned the winner. He received a Burger King crown, a champion’s belt and a small trophy.

“From the start it was a spectacle,” Mr Nasser told the BBC. “I would describe it as an internet meme come to life.”

The event also sparked a charity fundraising drive, which raised over $8000 for a local children’s hospital, Mr Nasser added.

The idea for the event began in April 2020 when Mr Swain, in “a spell of pandemic boredom,” started a group message with as many people he could find on Facebook who shared his first and last name. The college student challenged the doppelgangers to a duel for the right to be known as Josh Swain, on 24 April 2021.

He posted the exchange on Twitter, where it gained tens of thousands of “likes”.

Mr Swain said he was surprised at how big the event turned out.

“I did not expect people to be as adamant about this as they are right now,” the Associated Press news agency quoted him as saying.