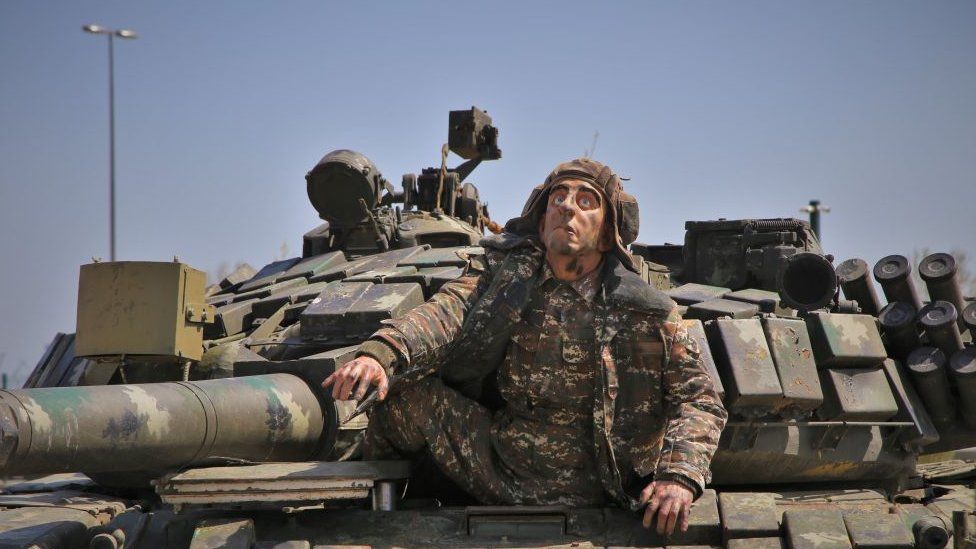 Azerbaijan has opened an outdoor museum to commemorate its six-week war with Armenia over the Nagorno-Karabakh region last year.

The Spoils Of War Park in the capital, Baku, features weapons, armour and vehicles seized from Armenian forces.

The attraction has angered Armenia, which has accused Azerbaijan of “intolerance and xenophobia”.

More than 5,000 were killed and many more displaced before a peace deal was reached in November.

Nagorno-Karabakh is recognised as part of Azerbaijan, but most of its people are ethnic Armenians. In the 1990s the Armenians seized control of the territory. Fighting flared up again last September and Azerbaijan recaptured large areas. Russian peacekeepers are deployed there now.

The entrance to the site is marked with a mural that reads “Karabakh is ours!”.

Inside, exhibits show Armenian helmets, tanks and arms, while mannequins in Armenian uniforms are displayed inside fake positions, dorms and control rooms.

The site was officially opened by Azerbaijani President Ilham Aliyev earlier this month.

Armenia said the ceremony was aimed at “publicly humiliating” the conflict’s casualties and prisoners.

This accusation was rejected by Azerbaijan, which said it had the right to “immortalise” its victory.