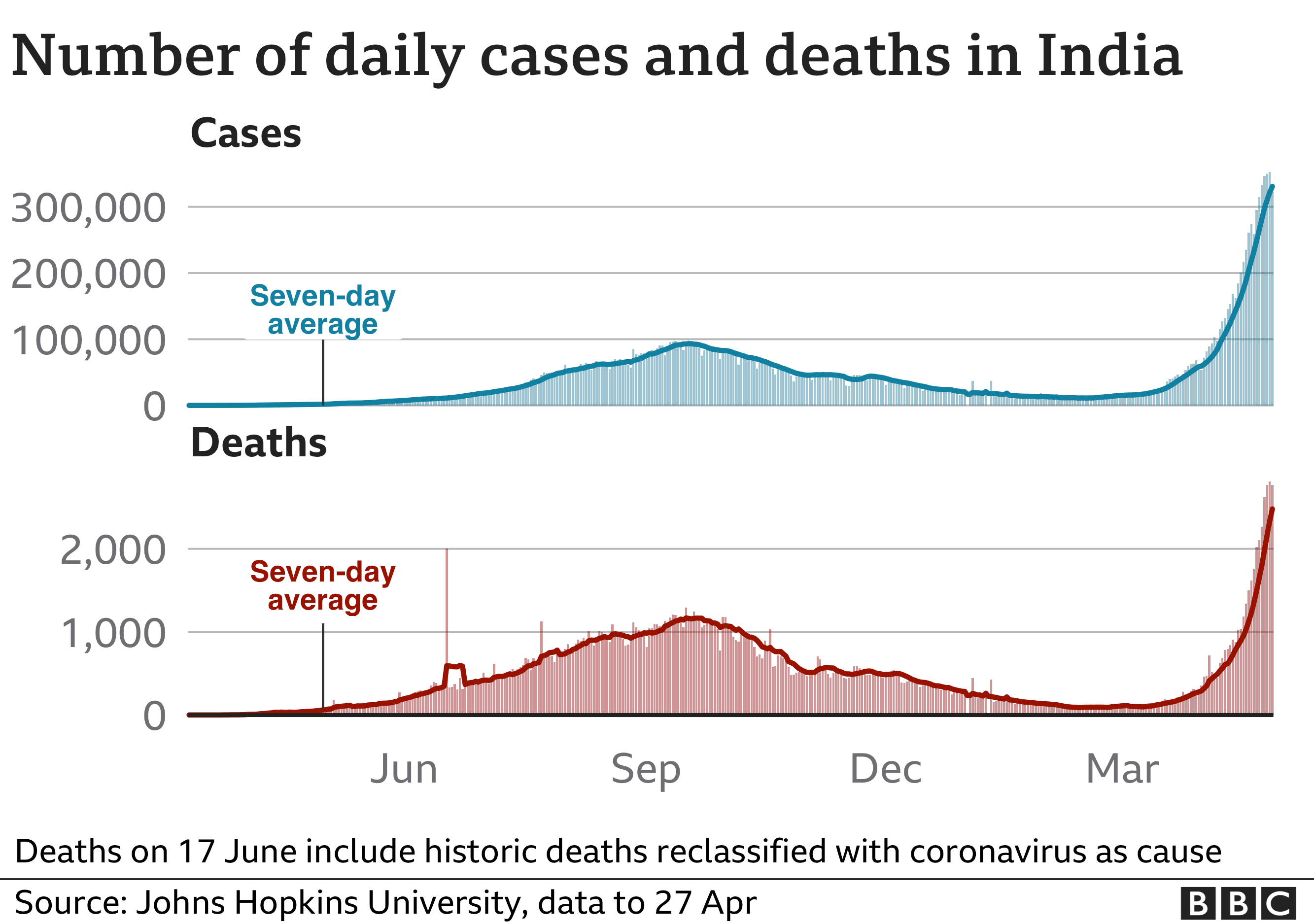 Makeshift pyres are being built in crematoriums in India’s capital Delhi as the city runs out of space to cremate its dead.

Deaths have been steadily rising in India as a deadly second wave of Covid infections devastates the country, with 380 recorded in Delhi alone on Monday.

India has recorded more than a million Covid-19 cases in just a few days.

The number of reported cases declined slightly on Tuesday, to 323,144 from the peak of 352,991 the day before, bringing the total number of Indian cases so far to nearly 17 million with 192,000 deaths.

However, it is thought the true figures are far higher – both for deaths and cases.

An investigation by television station NDTV found at least 1,150 extra deaths which were not included in Delhi’s official Covid count over the last week. Other investigations have found similar examples of undercounting replicated across the country.

Crematorium staff are working throughout the night, with relatives of the dead reportedly having to help with the cremations, piling wood and assisting in other rituals.

In Delhi, parking lots, parks or empty ground are now being sought for the increasing need for cremations. Families often have to wait for hours before they are allowed to cremate their dead.

At the capital city’s Sarai Kale Khan crematorium, at least 27 new platforms have been built, with 80 more being added in the park around the existing structure. Municipal authorities are also looking for additional spots near the city’s Yamuna river bed.

A worker at the crematorium, which originally had capacity for only 22, told The Hindu newspaper that they are operating from early morning to midnight.

The Ghazipur crematorium in East Delhi added 20 more pyres in a parking lot. An official told the Indian Express newspaper that there are so many bodies that more pyres had to be built, and there is a waiting time of three to four hours, with each body taking up to six hours to burn.

The situation is serious at other crematoriums too. Sunil Kumar Aledia, who runs the Centre for Holistic Development, an organisation which is providing assistance with oxygen, meals and also cremations during the Covid-19 crisis, told the BBC that some do not have space to expand.

Demand is likely to remain high. In Delhi – with its population of about 20 million people – hospitals are full and medical oxygen is scarce.

At least two hospitals in the city have seen patients die after oxygen supplies ran out. Ambulances are in short supply. It is becoming difficult for families to take their sick to hospitals even if they get a bed. Many have died waiting for one.

Social media is awash with frantic pleas for help with oxygen cylinders or life-saving drugs or ICU beds. The city’s testing capacity has been overwhelmed too.

Many countries have offered their assistance to India – with oxygen supplies, as well as ventilators and concentrators.

The UK has begun sending ventilators and oxygen concentrator devices. European Union member states are also due to send aid, with France saying it will send oxygen.

US President Joe Biden spoke to Prime Minister Narendra Modi and pledged America’s “full support”. The US is lifting a ban on sending raw materials abroad, enabling India to make more of the AstraZeneca vaccine. It will also provide medical equipment and protective gear.

Bhutan, a small landlocked nation sitting in the Himalayas between China and India, has said that it will supply liquid oxygen to the north-eastern Indian state of Assam.

India’s neighbour Pakistan, which has had tense relations with Delhi, has offered medical equipment and supplies. The country’s Edhi Foundation has also offered to send 50 ambulances to India.