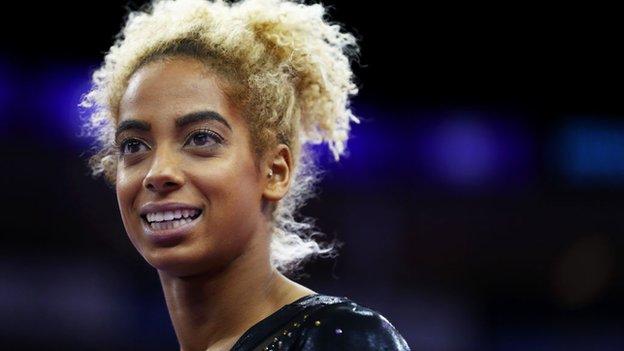 British-Jamaican gymnast Danusia Francis says the full body suits worn by German athletes could “open the door” for more women in the sport.

Sarah Voss was the first competitor to wear the suit at the European Gymnastics Championships last week – and was followed by two team-mates.

Francis, 26, told BBC Sportsday that these suits, which cover the athletes’ legs to the ankle, “gives the power of choice back” to the athletes.

Francis – who competes for Jamaica, having formerly represented Great Britain – says she didn’t know the suits were allowed in competition until Voss wore one in the European all-around event.

“I feel empowered that we’ve got this option where we can choose to cover up,” she said.

The international gymnastics federation (FIG) rules state competitors are allowed to wear a “one-piece leotard with full-length legs – hip to ankle”, provided it is of elegant design.

Why are the suits such a big deal?

It is the norm for female gymnasts to compete in leotards with bare legs. Their male counterparts wear shorts or trousers in all events.

But in a move she describes as taking a stand against “sexualisation in gymnastics”, Voss and her team-mates – Kim Bui and Elisabeth Seitz – donned the full length unitard.

She added that the issue had become all the more important to prevent sexual abuse – a subject that has plagued the sport of gymnastics.

‘We’re here to do sport and be taken seriously’

Pointing to the example of Germany’s team, Francis suggested that there are an increasing number of older gymnasts in the sport with the experience and confidence to help lead the way in combating sexualisation.

“I think as people are staying the sport longer, obviously they’re not young girls and they’ve got voices, they are women, so to see them making a statement, and on an international stage… I think it was great to see,” Francis said.

Francis, who will represent Jamaica at the Tokyo Olympics later this year, says these suits would give athletes the “power back” and send a message that “we are not here to parade our bodies around – we’re here to do sport and be taken seriously”.

Athletes have been deducted points for adjusting leotards during competition, but Francis says these suits can eliminate the possibility of that happening.

“Obviously if it’s that time of the month as well, you might not want to just have a small bit of material covering you down there,” she said.

“So all of these issues have to be addressed and I think they’ve started the conversation at the very least.”