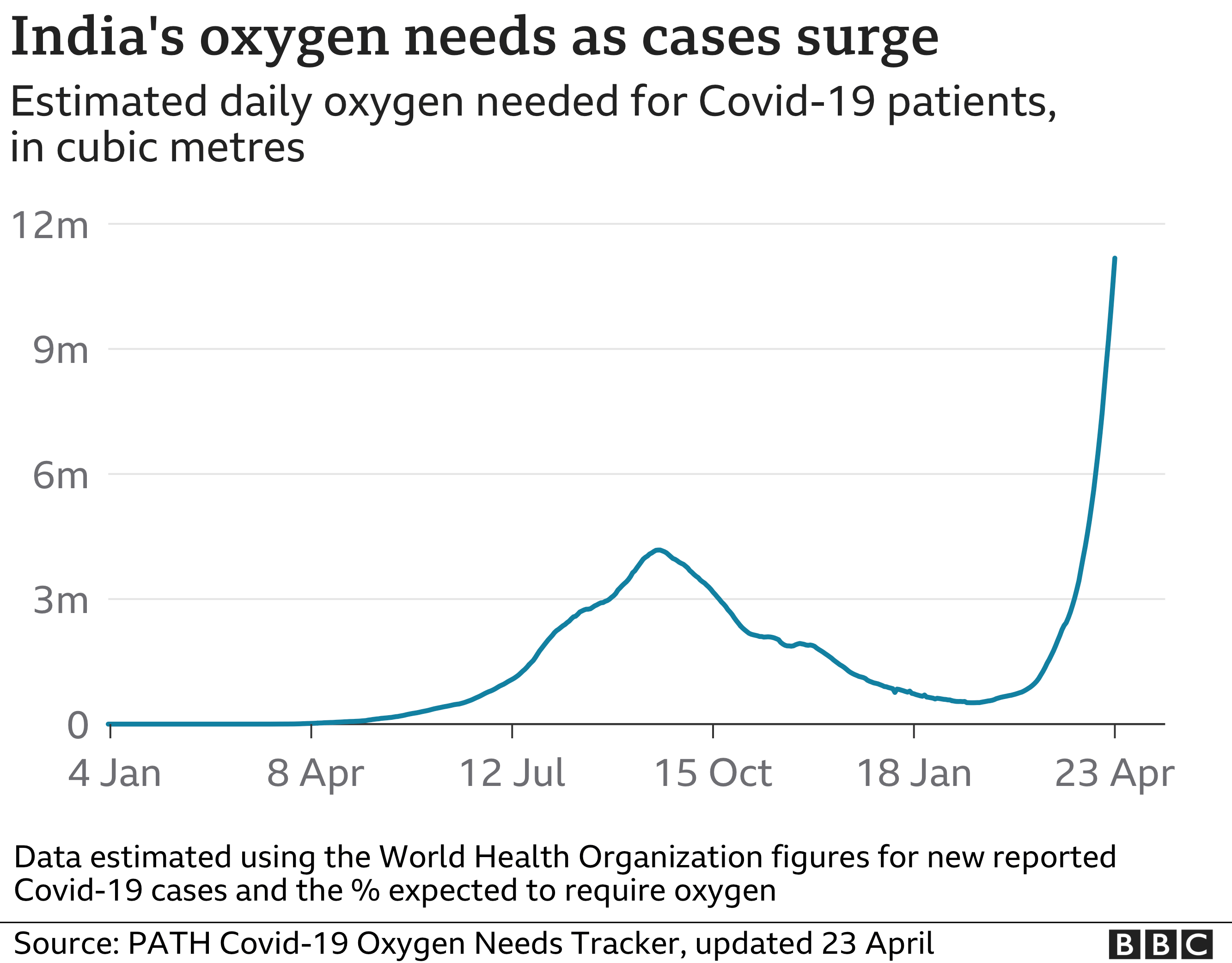 A devastating second wave of coronavirus in India has seen hospitals and crematoriums overwhelmed and widespread shortages of oxygen and medicines.

Here’s a visual guide to what is happening and what the authorities are doing about it.

There have been record numbers of cases and deaths

Case numbers and deaths in India are continuing to rise fast, fuelled by a new variant.

The country hit a record number of cases on Monday – the fifth time in a row – as well as its highest daily number of deaths.

But the true numbers of cases and deaths are likely to be higher than the numbers provided by authorities, with many people avoiding testing or struggling to access it. Many deaths in rural areas also go unregistered.

Doctors in India’s capital Delhi have described how people are dying on the streets outside hospitals as the country struggles to cope.

In total, India has confirmed more than 17 million infections and 197,000 deaths. Virologists say they expect the rate of infections to continue to increase for another two to three weeks.

The country has a chronic shortage of space on its intensive care wards, with many patients’ families forced to drive for miles to try to find a bed for their loved one.

In Delhi – a region of about 20 million people – hospitals are full and are turning away new patients.

Some streets outside medical facilities have become crowded with the seriously ill, their loved ones trying to arrange stretchers and oxygen supplies for them as they plead with hospital authorities for a place inside.

“We have been roaming around for three days searching for a bed,” one man told Reuters news agency as his wife sat immobile on the pavement.

On Monday, the government announced military medical infrastructure would be made available to civilians and retired medical military personnel would be helping out in Covid health facilities.

There’s a shortage of oxygen

Hospitals across India are also experiencing oxygen shortages and in desperate need of supplies, with some forced to put up signs warning of a lack of supplies.

The country now has the greatest demand for oxygen out of all other low, lower-middle and upper-middle-income countries, according to the PATH Oxygen Needs Tracker.

Demand has been growing between 6%-8% each day, according to PATH, an organisation that works with global institutions and businesses to tackle health problems.

Dr Harjit Singh Bhatti, who works on a Covid ward of Delhi’s Manipal Hospital, described watching people gasping for air in the street like “fish out of water”.

“They are not getting oxygen and they are dying on the roads,” he said.

Typically, healthcare facilities consume about 15% of oxygen supply in India, leaving the rest for industrial use.

But amid India’s second wave, nearly 90% of the country’s oxygen supply – 7,500 metric tonnes daily – is being diverted for medical use, according to Rajesh Bhushan, a senior health official.

To try to get supplies to where they are needed, the government has now started an “oxygen express”, with trains carrying tankers to wherever there is demand. The Indian Air Force is also airlifting oxygen from military bases.

The government has said it will be releasing oxygen supplies from armed forces reserves and has approved plans for more than 500 oxygen generation plants across the country to boost supplies.

In a bid to tackle the shortage of beds, Indian authorities are turning to train carriages, which have been converted into isolation wards.

About 4,000 Indian Railways coaches, adapted in March 2020, are being brought back into use to to help treat Covid patients with mild to moderate symptoms.

The trains, which can be driven to stations in cities and towns where required, have beds for patients, bathrooms, power points for medical equipment and oxygen supplies.

Indian Railways already has experience of running hospitals on trains. The Lifeline Express, launched in 1991, travels round the country providing diagnostic, medical and surgical treatment to patients.

Sports halls, stadiums and ashrams have also been converted into make-shift treatment centres to ease the pressure on hospitals.

Some of the beds being used are made from cardboard.

During a surge in cases last year, the Delhi campus belonging to the Radha Soami Satsang Beas organisation was transformed into the 10,000-bed Sardar Patel Covid Care Centre, with 1,000 “oxygen-supported” beds. It treated more than 11,000 people before it closed in February.

Aryan Paper, which makes the cardboard bed bases being used, says the emergency beds are made from high-strength corrugated board.

They are particularly useful in the current crisis because they are cheap, recyclable, can be flatpacked for easy transportation and assembled in five minutes.

Many people are being forced to turn to makeshift facilities for mass burials and cremations as India’s funeral services become overwhelmed.

At least one facility in Delhi has resorted to building pyres in its car park in order to cope with the number of bodies.

Other sites are holding mass cremations, with staff reportedly working day and night in several cities.

Jitender Singh Shunty, head of a non-profit medical service running a crematorium in north-east Delhi, is using a car park next door to deal with the unprecedented number of bodies.

“It’s difficult to watch,” he said.

A number of places have also reported running low on wood for pyres.

Jayant Malhotra, who has been helping out at a crematorium in Delhi, told the BBC he had never seen such a terrifying situation.

“I can’t believe we’re in the capital of India. People aren’t getting oxygen and they’re dying like animals.”