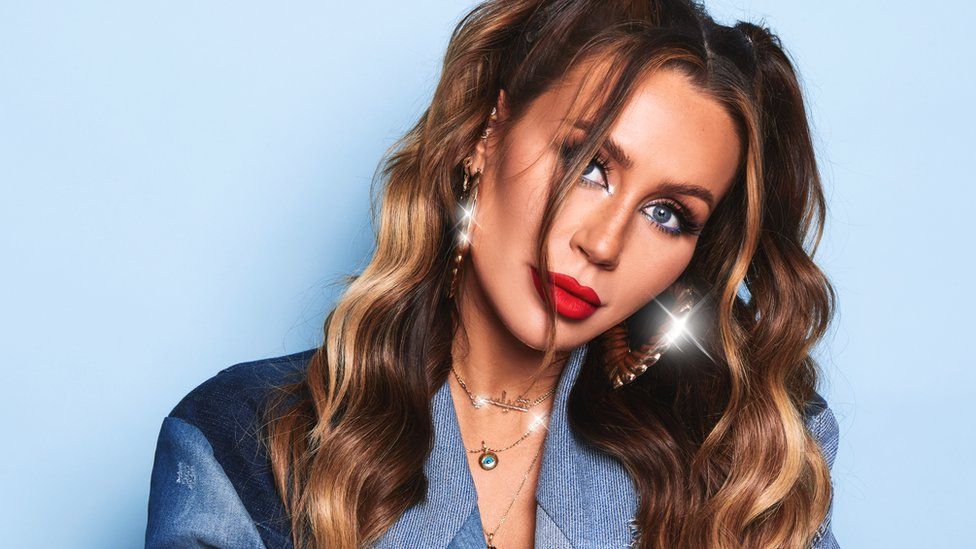 “I’ve definitely encountered lots of negativity along the way, which is hard to ignore sometimes, but I feel like it just comes with it.”

For small businesses, “tapping into social media will be your secret weapon”, she says.

It is a rapidly growing field. More than £10bn is expected to be spent on influencer marketing next year – double what it was just two years ago.

But for all the financial success influencers may enjoy, having a big online profile can also leave them more exposed to negative or hurtful comments.

Authenticity is a much-vaunted ideal in the world of influencer marketing and there’s an expectation that people will share a lot about themselves and their home lives online.

‘Hits you where it hurts’

If there were a job description for the role of influencer, CC Clarke would probably include “having a thick skin” – something she says she’s had to develop over the years when faced with unpleasant comments from online trolls.

“The positivity far, far outweighs the negativity… it’s just the negativity hits you where it hurts a little bit more,” she tells BBC Radio 5 Live’s Million by 30 podcast.

She says the worst comments have been those criticising her parenting style – what she calls a “mum-shaming parade”.

“Of the things I’ve spoken about online – from make-up to beauty, to music to personal life – becoming a mum, and receiving the amount of negativity that I have, has been mind-blowing – from the name of my baby girl, to the way that I hold her.

“Luckily I’ve got a thick skin. I was a little bit sensitive, of course, when I was a new mum – your emotions are all over the place and I was quite upset by it.”

CC Clarke says like most parents, she is doing her best – but some of her followers offer her less-than-helpful advice.

“People would start to panic you because of all sorts of things, you know, ‘If she lays like that, she won’t wake up in the morning’.

“I was told she was going to go blind the other day because she was watching TV with us.”

She has developed a way to deal with it, so that “it doesn’t bother me in the slightest”.

But there is a balance between having a thick skin and accepting the unacceptable.

Sarah Holland, chief executive of Riskeye – which works with businesses and individuals to make their social media safer – says “you definitely have to know what you’re getting into”.

And while CC has learned to handle it, “lots of people can’t”.

“You don’t have to tolerate some of this stuff that gets put up,” Ms Holland says. “You can take things down, there are rules and regulations out there.”

She says organisations like hers will “step in and advocate” for clients and remove hurtful comments, but both she and CC think the problem ultimately “sits firmly at the door” of the social media platforms.

They are calling on them to take a more pro-active approach to tackling the problem.

“I definitely feel like a lot of powerful voices online have really been shouting about the fact we want a monitoring of these sorts of trolls, but I don’t know if anything’s going to be done about it,” CC says.

“Social media has a lot to answer for when it comes to bullying.”

‘Time to step up’

Sheree Atcheson, a computer scientist and global diversity and inclusion executive in the tech sector, agrees. She told the BBC that this type of trolling was just a part of a bigger problem.

“There’s a lot of work that the tech industry has to do when it comes to online safety – and that’s what we’re talking about here.

“Even though we’ve had social media really for a decade or so, we are still really getting to grips with the power that it has, and what that means is it needs to be regulated.

Facebook, which owns Instagram, told the BBC it had recently launched new measures to tackle harmful direct messages on the platform through “pro-active detection technology” and that it offers a number of tools to help control abusive comments.

“We know there’s still more we can do, and we’re committed to continuing our fight against bullying and online abuse,” a Facebook spokesperson said.

It’s not all about social media for CC, though.

She is hoping to become a successful singer-songwriter as well as running her beauty business and now finds she can “honestly just switch off” when she’s with friends and family.

“Being around people who aren’t in that social media world has really helped,” she says. “We don’t have to talk about followers, or likes or pictures.”