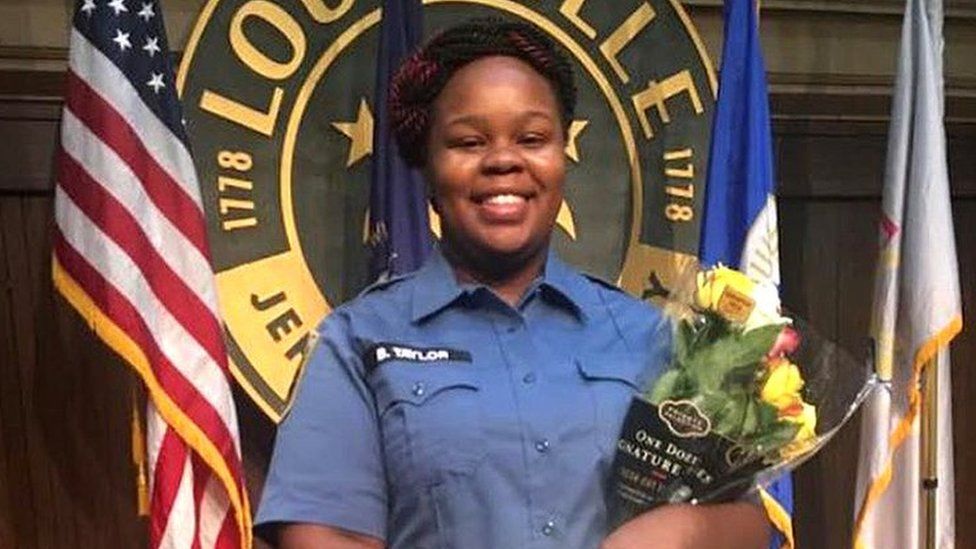 The US Justice Department has ordered an investigation into the Louisville Police Department in Kentucky, following the fatal shooting of Breonna Taylor during a police raid a year ago.

It is the second such inquiry announced in a week. The Minneapolis Police Department is also being investigated over George Floyd’s death in Minnesota.

Both cases fuelled protests against racism and police brutality.

Louisville city and police leaders said they welcomed the investigation.

Police chief Erika Shields called it a “huge opportunity to get us on the path forward” while Mayor Greg Fischer said they stood “ready to assist” in any way they can.

What will be investigated?

Attorney General Merrick Garland said the probe would look at whether there was “a pattern or practice of using unreasonable force, including with respect to people involved in peaceful expressive activities”.

It would also examine whether the police “engages in unconstitutional stops, searches and seizures as well as whether the department unlawfully executes search warrants on private homes”.

The probe will also assess whether the police department “engages in discriminatory conduct on the basis of race” as well as “disability”, Mr Garland said.

He said if violations are found that can not be resolved with police and city officials, he has the power to bring a civil lawsuit.

Mr Garland announced a similar review of the Minneapolis Police Department in Minnesota five days ago, after former police officer Derek Chauvin was found guilty of murdering George Floyd by kneeling on his neck in May 2020.

These two investigations by the Justice Department mark a departure from the Trump administration, which had refused to use federal authority to reform local police departments.

“All of these steps will be taken with one goal in mind: to ensure that policing policies and practices are constitutional and lawful,” Mr Garland said.

What happened to Breonna Taylor?

Breonna Taylor, a 26-year-old paramedic, was fatally shot by officers in March 2020, after they forced entry into her Louisville home using a “no-knock” warrant that meant they did not have to announce themselves.

During the operation Ms Taylor’s boyfriend Kenneth Walker shot and wounded one of the officers. Last month, a charge of attempted murder against him was dropped.

Mr Walker said he fired once because he believed criminals were breaking in. The officers responded with 32 shots, six of which struck Ms Taylor.

The three police officers who carried out the raid were eventually sacked and one, Brett Hankison, was charged with endangering Ms Taylor’s neighbours by firing into a next door apartment.

The city of Louisville paid $12m (£8.6m) to Ms Taylor’s family and agreed to police reforms to settle a wrongful death lawsuit.