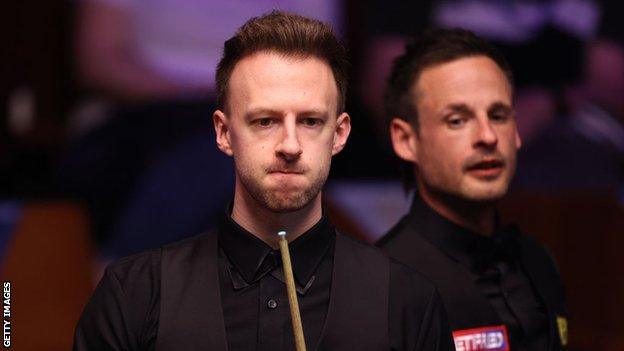 Two tons in a four-game burst saw 2019 winner Trump recover from 3-1 down and he ended 11-5 ahead and just two frames from victory as Dave Gilbert struggled.

Jones, a World Championship quarter-finalist in 2012, trailed 2-0 but responded by taking four of the next five frames with breaks of 57, 121 and 81 before the Essex man levelled the opening session with a score of 61.

But Bingham dominated on the resumption, with frame-winning breaks in five of six frames.

The only blemish was when he broke down on the 11th black when he looked well set for a maximum.

Trump on top against frustrated Gilbert

World number 15 Gilbert became increasingly rattled after wasting a great opportunity to level the match at 5-5.

The world number one required snookers but Gilbert’s careless pot on a blue left a sniff of a chance and Trump took full advantage.

Trump did not need to find his best form and, although he still finished with three centuries and four scores of more than 50, it was his greater composure that made the difference.

Play resumes in both matches on Monday afternoon.

Murphy closes in on quarters

Murphy, the 2005 champion, looked capable of storming to a two-session victory as breaks of 68 and 88 put him 8-2 ahead.

But Yan found the form that saw him crowned Masters champion this season and was vastly improved from Saturday.

Allen battles back against Selby

Three-time winner Selby remains in control in his last-16 tie, but Northern Ireland’s Allen cut the lead to three frames at 9-6.

World number 13 Allen adopted a more cautious approach than usual and that seemed to work as he scored three half-centuries to get back to within two frames at 8-6.

But Selby took the next before play was called off a frame early having overrun.

Both the Selby match and Murphy’s meeting with Yan conclude on Monday night.