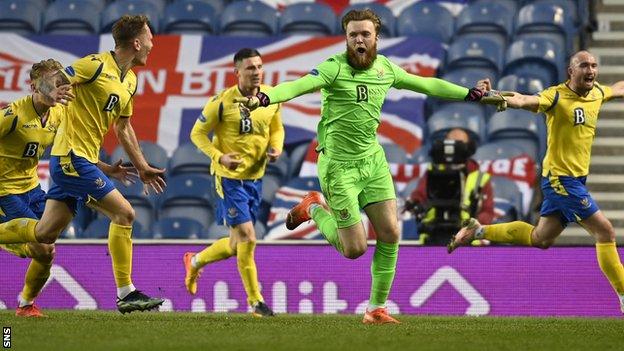 St Johnstone stunned Scottish Premiership champions Rangers to knock them out of the Scottish Cup in a penalty shootout.

James Tavernier scored deep into extra time but Chris Kane touched in Clark’s effort to send the tie to penalties.

St Johnstone will find out their semi-final opponents – with Hibernian and Dundee United already through – in Monday’s draw, with the last four due to take place on the weekend of 8 and 9 May.

And after winning the League Cup for the first time in their history in February, they are now two games away from completing a remarkable domestic cup double.

Although Rangers had made five changes from their midweek 1-1 draw at McDiarmid Park, St Johnstone had clearly taken encouragement from those 90 minutes.

The Perth side started well, going at Rangers even though they were nearly caught out early on the break when goalkeeper Clark had to deflect a goal-bound Glen Kamara shot away.

But the visitors’ confident start continued. Scott Tanser met a corner first time and hammered a left-foot shot that Allan McGregor had to punch clear.

Rangers, predictably, began to enjoy more possession. Alfredo Morelos headed at goal and Joe Aribo had a half-chance that he bundled wide, but back at the other end Stevie May almost caught out McGregor when he raced to close down a clearance.

As the break approached, Morelos sliced a shot over when left unmarked in the box at a corner, and then he stung the palms of Clark early into the second half.

The Colombia striker then got between Shaun Rooney and Jason Kerr but headed Tavernier’s cross off the far post with a thud.

St Johnstone as an attacking force were waning. Borna Barisic had a free-kick touched around the post, then Clark brilliantly denied Morelos at point-blank range when he got a leg to a downward header. He had to make further saves from Scott Wright and Kemar Roofe as the pressure intensified.

Callum Davidson’s side just needed one chance, though. Michael O’Halloran broke free but couldn’t get the ball out of his feet quickly enough.

Into extra time the clock ticked. Clark was soon in action again, clawing away a near-post Filip Helander effort.

But then O’Halloran had a big chance when he broke from midfield and found himself one-on-one with McGregor, only for the goalkeeper to get down low to deny him.

Then, after no goals, two ones arrived in an enthralling finish.

Tavernier found space in the box to meet a cross and nod the ball beyond Clark. And with it arriving so late, it looked like it would be the final part of the story.

But with seconds left, Clark went forward at a corner and headed downwards, with Kane getting the final touch to take the game to penalties.

Tavernier had his opening spot kick saved, and then Clark again got down low to push away the home side’s fourth attempt from Roofe.

After Liam Craig, Callum Booth and Jason Kerr all netted their spot kicks, McCann beat McGregor with his penalty to win the tie.

Man of the match – Zander Clark

St Johnstone pressed Rangers high and at times knocked them off their stride. But even when Rangers did enjoy large spells of possession, their ability to unlock the opposition defence was not working as well as it has for the vast majority of the season.

But it was as dramatic a finish as you will see. Goalkeeper Clark’s decision to go forward at a corner paid dividends and saved St Johnstone when their cup dreams looked over.

And now, it could be a dream cup double in Davidson’s first full season in charge.