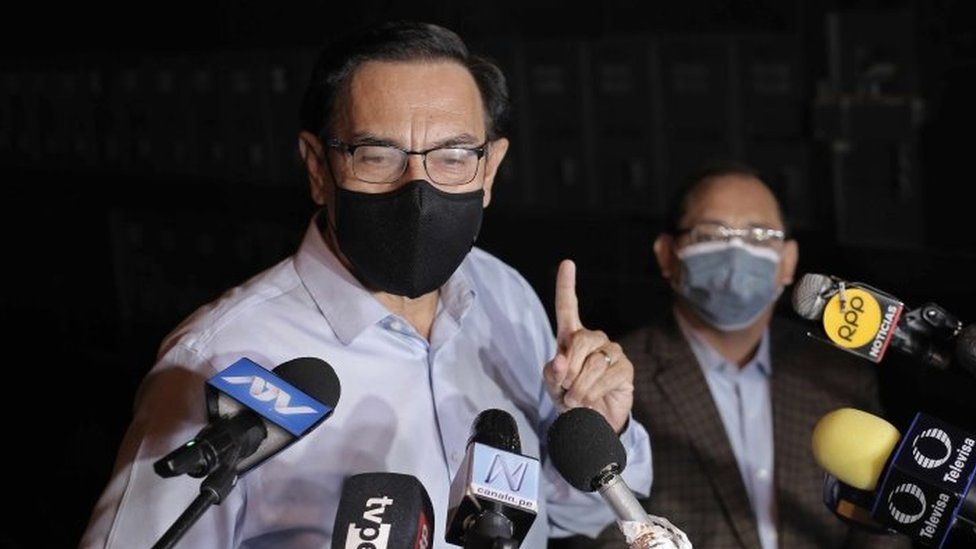 Peru’s former president, Martín Vizcarra, has tested positive for coronavirus six months after he said he had been vaccinated against Covid-19.

Mr Vizcarra confirmed the positive test just days after he was banned from public office for allegedly jumping the queue to receive the vaccine.

He is one of dozens of public officials embroiled in the “vaccinegate” scandal.

Mr Vizcarra said he was a volunteer in a trial, but the university hosting it said he asked to be vaccinated.

Only 2.5% of Peruvians have received at least one dose of a Covid vaccine so far and the country is going through a second wave, registering record numbers of cases and deaths in recent weeks.

He said that they had tested positive “despite the necessary care we’d taken to avoid bringing the virus home”.

Vaccines are widely regarded as the most powerful weapon for combating the pandemic. But no jab is ever 100% effective and there is a chance people might catch the virus or pass it on even after having had their jab.

Local media had criticised Mr Vizcarra for hugging people during his recent campaign ahead of elections in which he was running for a seat in Peru’s Congress.

Mr Vizcarra won the seat in the 11 April election despite being tainted by the vaccinegate scandal. However, only days later, the outgoing Congress found him guilty of influence peddling, collusion and making false declarations and banned him from holding public office for 10 years.

The vaccinegate scandal broke in February and as well as Mr Vizcarra, hundreds of other civil servants and public officials have been implicated.

Mr Vizcarra said he and his wife had received the Sinopharm vaccine in October as they were volunteers in a clinical trial.

But the doctor leading the trial, Germán Málaga, disputed Mr Vizcarra’s version of events. He said that the then-president had approached him about being vaccinated on 1 October, four months before Peru started to roll-out its vaccination programme.

He also said that Mr Vizcarra knew he would be getting the real vaccine and not a placebo. Volunteers in blind trials are not given that information at the time of their jab.

The vaccinegate scandal led to the resignation of Peru’s foreign and health ministers. Congress impeached Mr Vizcarra in November, but his removal from office was not related to vaccinegate but was over separate corruption allegations.

Mr Vizcarra’s positive coronavirus test is also likely to raise questions about the efficacy of the Chinese-produced Sinopharm vaccine.

Sinopharm said in December that phase three trials had shown it was 79% effective.

Technical experts at the World Health Organization (WHO) are due to review the Sinopharm vaccine on Monday.