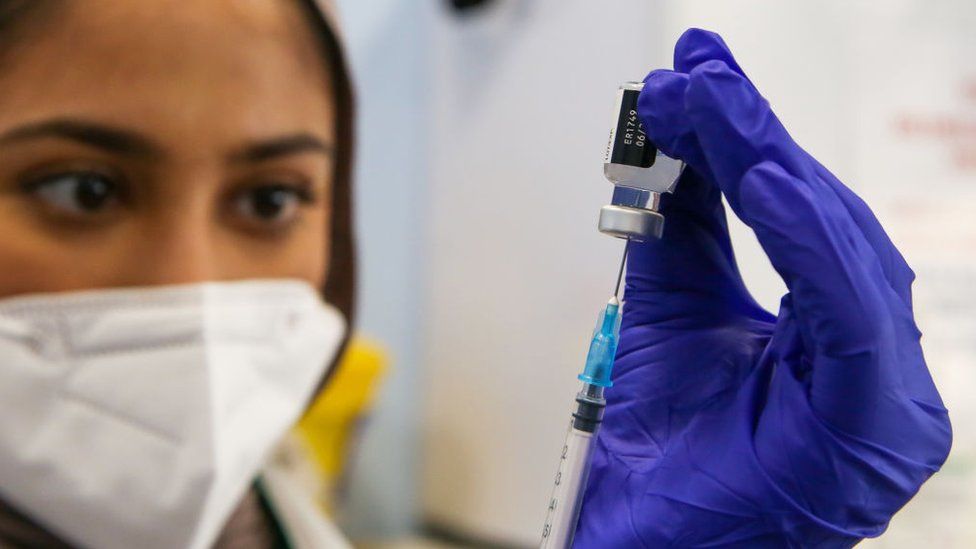 The chances of becoming infected by Covid fell sharply after a first dose of either the AstraZeneca or Pfizer vaccines, a UK study has found.

The vaccines worked just as well in the over-75s and those with underlying health conditions, as other people.

The Office for National Statistics (ONS) and University of Oxford research also found a strong antibody response in all age groups from either jab.

Everyone showed some response to both vaccines, they said.

The research, contained in two studies which have not yet been peer-reviewed or published, is based on virus tests from 370,000 people in the general UK population – one of the largest to date.

It provides further real-world evidence that the vaccines being used in the UK to protect against Covid-19 are effective at protecting people against coronavirus infections.

In the first study, people who had been vaccinated with a single dose of either the Oxford-AstraZeneca or Pfizer-BioNTech vaccines were 65% less likely to get a new Covid infection.

The study showed both vaccines were effective against the Kent variant (B117) which was circulating at the time.

Dr Koen Pouwels, senior researcher in University of Oxford’s Nuffield Department of Population Health, said the data backed up the decision to extend the gap between doses.

“The protection from new infections gained from a single dose supports the decision to extend the time between first and second doses to 12 weeks to maximise initial vaccination coverage, and reduce hospitalisations and deaths,” he said.

However, he said the figures showed there was still a chance vaccinated people could acquire Covid again and pass it to others, emphasising the need for social distancing and masks.

The second study, in nearly 46,000 adults who had been vaccinated with one dose, found strong antibody responses – a sign that the vaccines are stimulating the body’s defence system to protect against the virus – in all age groups.

These antibody responses were “broadly sustained out to 10 weeks afterwards”, the researchers said.

Although antibody levels rose more slowly and to a lower level with a single dose of Oxford-AstraZeneca, they dropped more quickly after one Pfizer dose, particularly in older age groups.

There was a better response in younger adults compared with older adults over 60 with both jabs, but after two doses of Pfizer antibody levels were high across all ages, the study said.

One finding that surprised researchers was the amount by which the immune response shot up in the over-80s after a second dose – far more than in younger age groups.

The findings highlight the importance of people getting their second vaccine dose for increased protection, the researchers said.

But it is still not clear what the build-up of antibodies after a Covid vaccine actually means.

Prof Sarah Walker, chief investigator on the studies, from the University of Oxford, said: “We don’t yet know exactly how much of an antibody response, and for how long, is needed to protect people against getting Covid-19 in the long term – but over the next year, information from the survey should help us to answer these questions.”

Both studies are based on data from the Covid-19 Infection Survey, a partnership between the University of Oxford, the ONS and the Department for Health and Social Care.