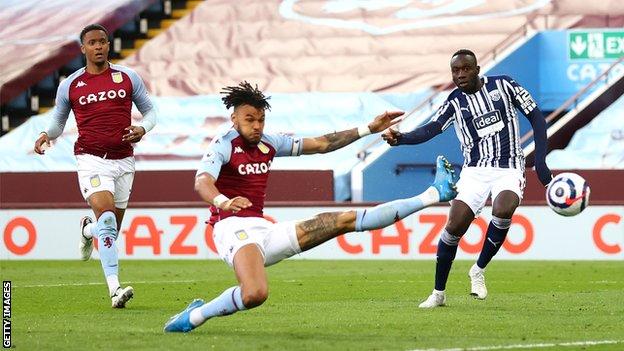 The Baggies fell behind when Anwar El Ghazi marked his return to the side by firing Villa ahead from the penalty spot after Semi Ajayi had clipped Ross Barkley.

They were then awarded a penalty of their own, Matheus Pereira beating Emiliano Martinez to equalise after Ezri Konsa caught Ainsley Maitland-Niles.

Brazilian forward Pereira then hit the bar from a free-kick after creating chances for Okay Yokuslu and Maitland-Niles before Mbaye Diagne’s deflected finish off Tyrone Mings looked to have sealed a third win in four games.

But Davis pounced in the closing moments for his first Premier League goal after a defensive mix-up to deny the Baggies, who are now nine points from safety with five games remaining.

They had shown tremendous character to bounce back from Thursday’s tame defeat at Leicester and come from behind to lead their West Midlands rivals at Villa Park,

West Brom started this game 10 points from safety following Burnley’s handsome win at Wolves earlier on Sunday and could quite easily have collapsed after El Gahzi’s ninth minute penalty.

Instead they clawed their way back with Pereira outstanding, the former Sporting Lisbon player scoring one, hitting the bar and setting up numeous chances for his team-mates.

At the other end Sam Johnstone, whose long clearance led to the second goal, produced a huge save to stop England striker Ollie Watkins from equalising.

But they could not hold on and face a quick return to the Championship one season after winning automatic promotion with Leeds.

Despite Davis’ equaliser, it is now one win in eight games for an Aston Villa side who continue to miss their influential captain Jack Grealish.

Villa’s season is fizzling out but there were positives for Dean Smith despite their failure to secure maximum points against their struggling neighbours.

While it remains unclear when Grealish will be back, Brazilian striker Wesley got his first taste of action 480 days after he suffered a serious knee injury.

Mid-table Villa have taken just six points from the last 24 on offer but against West Brom they at least showed they are prepared to battle to the end.

Smith knows he has work to do to improve his squad this summer but this has been a highly satisfactory season for Villa after surviving relegation on the final day of last season.

More saves than anyone else – the stats

Villa are away at Everton on Saturday (20:00 BST) while West Brom host neighbours Wolves in the Black Country derby on Monday, 3 May (18:00).