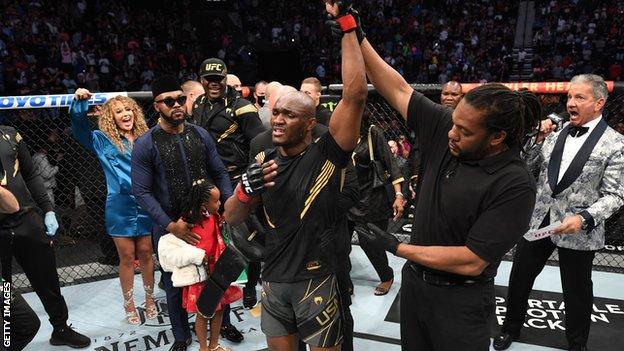 The bout, which took place in front of 15,000 fans in Jacksonville, was a rematch of their meeting at UFC 251, where Masvidal stepped in on six days’ notice but lost out to Usman on the scorecards after five gruelling rounds.

American Masvidal, 36, said that he would fare better after a full training camp, while Nigerian Usman, 33, promised to deliver an even more decisive victory in the rematch to register his fourth successive title defence.

The pair engaged in a thrilling back-and-forth battle through round one, with both men enjoying success on the feet, while Usman scored a significant takedown midway through the round.

The bout exploded in round two when Usman connected with a huge straight right hand that sent Masvidal crashing to the canvas for a knockout victory.

Usman’s win improved his record to 19-1 and extended his unbeaten run to 18 fights, including 14 straight victories in the UFC.

“I told everybody, I’m still getting better. The sky’s the limit for me as long as I’m doing this,” he said.

“I know with my fundamentals, I am the pound-for-pound best fighter on the planet right now.”

Masvidal was classy in defeat as he reacted to the first knockout loss of his 50-fight MMA career.

“First time in my career, and it’s in front of all my people, my family and my friends, so it hurts,” he said.

“I’ve never been knocked out in 50 pro fights. Usman showed me something that he didn’t show in the first fight. I didn’t feel his power, and that’s what happens when you get overconfident. I thought we were going to wrestle more.

“All the props to him in the world. He caught me by surprise. He’s got my number. There’s nothing I can say. He won this fair and square. God bless him.”