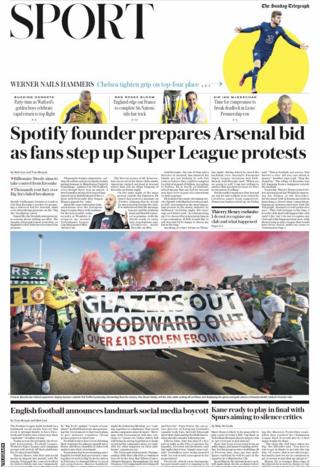 Manchester United’s England left-back Luke Shaw, 25, is in line for a new contract as a reward for his excellent form this season. (Star)

Inter Milan remain in the hunt to sign Manchester City’s Argentina striker Sergio Aguero but Barcelona are still favourites to sign the 32-year-old. (Tuttosport, via Sun)

Ajax are willing to sell Argentina defender Nicolas Tagliafico, 28, for £13m with Leeds United, Manchester City and Inter Milan all interested in the left-back. (Mail)

Manchester United owners the Glazers have set an asking price of £4bn to sell the club, amid fan protests outside Old Trafford on Saturday. (Mirror)

Spotify’s billionaire founder Daniel Ek is preparing a takeover bid for Arsenal, after initially tweeting about his interest on Friday. (Telegraph – subscription required)

Manchester United are looking at Aston Villa’s England goalkeeper Tom Heaton, 35, if his compatriot Sam Johnstone, 28, of West Brom, does not want to return to the club where he began his career. (Sun)

Villarreal’s Spain centre-back Pau Torres, 24, has been seeking advice from his friends about a possible summer transfer to Manchester United. (Manchester Evening News)

The Premier League is in talks to scrap its television rights auction in favour of rolling over existing deals with Sky, BT and Amazon. (Telegraph – subscription required)

Arsenal and West Ham are considering a summer move for Lyon’s Denmark defender Joachim Andersen, 24, who is on loan at Fulham. (Mirror)

Italy forward Moise Kean, 21, who is on loan at Paris St-Germain from Everton, has not ruled out a return to his former club Juventus in the future. (Goal)

Arsenal could revive their interest in Borussia Dortmund and Germany midfielder Julian Brandt, 24, as the Gunners fear taking on-loan Norway playmaker Martin Odegaard, 22, on a permanent deal from Real Madrid will prove too expensive for them. (Bild, via Express)

Manchester City will not immediately send Brazilian forward Kayky out on loan after signing the 17-year-old from Fluminense. He is thought to have “a more accessible route to the first team” at Etihad Stadium. (Athletic, subscription required)

Metz and Mali defender Boubakar Kouyate, 24, has attracted interest from Roma and Atalanta, as well as Southampton, Norwich and Newcastle, who are also following his team-mate Pape Matar Sarr. The 18-year-old Senegalese midfielder has also been linked to Chelsea and Everton. (L’Equipe – in French)

Barcelona have put a price of £44m on France forward Ousmane Dembele, 23, who has been linked with Manchester United and Liverpool. (Sport – in Spanish)

Juventus hope to tempt AC Milan’s Gianluigi Donnarumma, 22, to Turin with a significant wage increase. The Italy keeper is out of contract at the San Siro this summer and is yet to agree a new deal. (Corriere dello Sport)

AC Milan have already lined up 25-year-old France keeper Mike Maignan from Lille as a replacement for Donnarumma. (Calciomercato – in Italian)