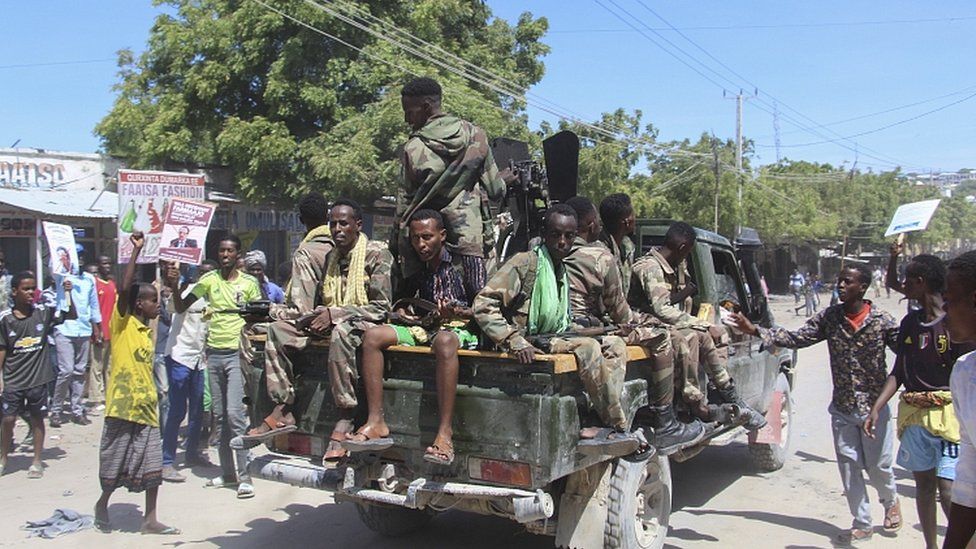 Fighting has erupted in the Somali capital, Mogadishu, reportedly between sections of the security forces supporting President Mohamed Abdullahi Mohamed and units opposed to him.

Last week Mr Mohamed – known as Farmajo – controversially approved a two-year extension of his term in office. His mandate officially ended in February.

The move was strongly criticised by the UN and the African Union.

Details on Sunday’s violence were sketchy. The privately owned Morad news website tweeted that heavy gunfire had broken out in north Mogadishu. It said the fighting was between pro-government forces and military units that support the opposition.

Caasimada Online, another privately owned website, said anti-government protesters were burning tyres parts of north Mogadishu were under the control of rebel soldiers.

Somalia has been torn by conflict for decades but had been moving towards stability since 2012 when a new internationally backed government was installed.

However, delayed elections following the end of President Mohamed’s mandate in February has thrown the country into renewed chaos. Some international donors have also pulled out, causing a cash crunch for the government.

Somali elections are conducted under a complex indirect system where clan elders select MPs, who in turn choose the president.

But this time there have been regional squabbles over how power is distributed – and a row over a new election commission.

The UN Security Council said on Friday that the political deadlock was diverting attention from serious problems including the pandemic, a locust invasion and Islamist militancy.