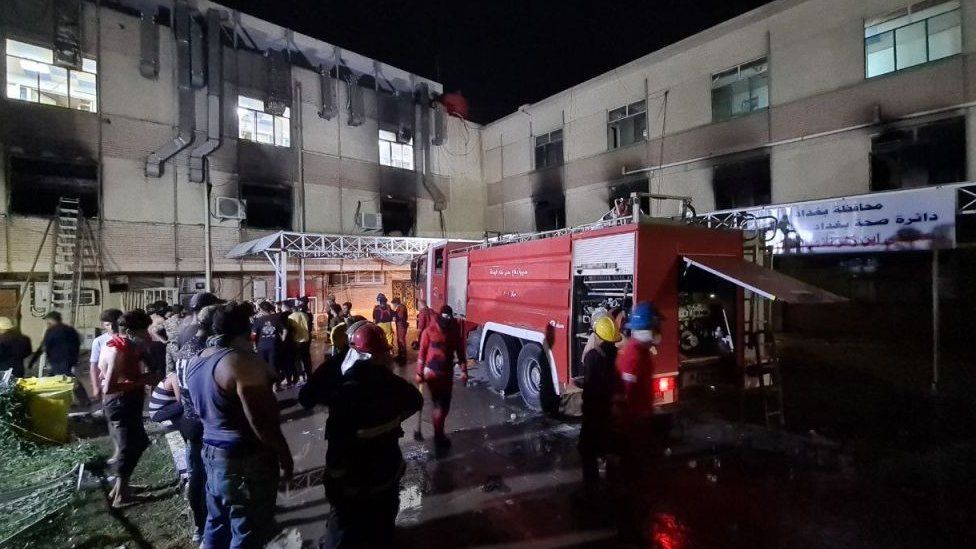 At least 23 people have been killed in a fire at a hospital treating coronavirus patients in the capital of Iraq, Baghdad.

Dozens of others were injured in the blaze, which erupted at the Ibn Khatib hospital on Saturday night.

Reports say an accident had caused an oxygen tank to explode, sparking the blaze.

Videos on social media show firefighters scrambling to extinguish the flames as people flee the building.

Iraq’s Prime Minister Mustafa al-Kadhimi called for an immediate investigation into the causes of what he called a “tragic accident”.

The head of Iraq’s Civil Defence, Major General Kadhim Bohan, told state media the fire broke out in the hospital’s intensive-care unit, on a floor “designated for pulmonary resuscitation”.

So far, emergency crew had rescued 90 out of 120 patients and relatives, state news agency INA quoted him as saying.

About “30 patients were in the intensive care unit”, which was reserved for the most severe cases of Covid-19 in Baghdad, a hospital source told the AFP news agency.

The injured and patients who weren’t hurt have been taken by ambulance to other hospitals nearby.

Iraq’s Civil Defence said the fire was under control by the early hours of Sunday morning.

Baghdad Governor Mohammed Jaber echoed the prime minister’s call for an urgent investigation to determine if anyone should be “brought to justice” for negligence.

In a statement, the government’s human rights commission said the incident was “a crime against patients exhausted by Covid-19”.

Iraq’s hospitals have been pushed to the limit during the coronavirus pandemic, adding to the strains wrought by years of war, neglect and corruption.

Coronavirus infections have been rising steeply since February in Iraq, and passed one million cases in total this week.

The health ministry has recorded a total of 1,025,288 cases of the disease and 15,217 deaths since the pandemic began.

The country launched its vaccination campaign last month, and has received nearly 650,000 doses, most of which have come from Covax, a global programme for sharing jabs.