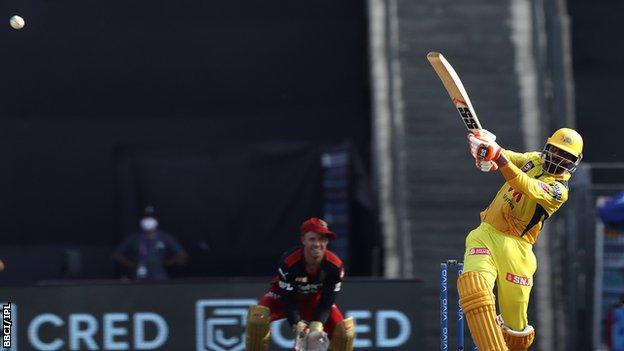 Jadeja, who was dropped on nought, equalled the IPL record for most runs by a batsman in an over when he hit 37 off the final over of CSK’s 191-4.

The win moves CSK top at the expense of RCB, who suffer their first defeat.

CSK looked set for a below-par score when they went into the final over on 154-4, despite a half-century from South Africa’s Faf du Plessis.

However, Jadeja reeled off a succession of powerful strokes to blast Harshal Patel all over the Wankhede Stadium.

He smashed four straight sixes – one of which was off a no ball – before ending the over with a two, six and four.

Patel, who had impressive figures of 3-14 heading into the final over, finished with 3-51.

To add to RCB’s pain, Jadeja was dropped at midwicket by Dan Christian when he had yet to score.

England’s Sam Curran got CSK off to a strong start with the ball when he dismissed RCB captain Virat Kohli for just eight.

He also ran out Christian with a direct hit to demolish RCB’s top order and leave them 83-6.

Some big-hitting from Kyle Jamieson (16) attempted to get RCB back into the game, but they were well short of their victory target.