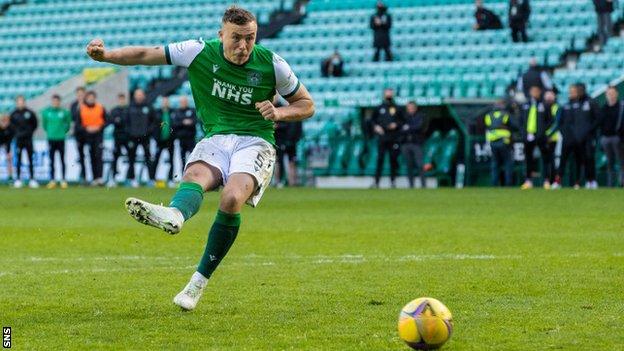 Hibernian reached the Scottish Cup semi-finals for the seventh time in 10 seasons after a thrilling shootout win over Motherwell at Easter Road.

Ryan Porteous took advantage of two Well misses to win it from the spot.

A Christian Doidge header and a suspiciously offside Jackson Irvine gave Hibs a deserved lead after the break following a quiet first half.

But a Ricki Lamie volley and Tony Watt header levelled, with Hibs’ Alex Gogic sent off seconds before penalties.

Hibs await the winners of two quarter-finals on Sunday and one on Monday – all involving rival Scottish Premiership sides.

Third-top Hibs lead Motherwell by 18 points in the top flight. But, with a win apiece and a draw between them this season, it was always likely to be a tight contest.

Indeed, with Motherwell unbeaten at Easter Road in their two earlier visits – and without a defeat in four outings – they arrived with justified confidence.

Hibs, though, who had the better of a stodgy first half, although a drive from Motherwell midfielder Allan Campbell, pushed away by Matt Macey, was the only test for either goalkeeper.

It was no surprise when the home side took the lead when Paul McGinn’s cross found Doidge climbing above on-loan Blackburn Rovers defender Tyler Magloire to power a header past exposed goalkeeper Liam Kelly.

Doidge somehow scooped the ball over Kelly and the crossbar from only four yards out moments later, while Devante Cole was denied by Macey’s big toe at the other end.

Suddenly, we had a game on our hands and, when fit-again striker Watt replaced Magloire, the change in the visitors’ formation forced Hibs deeper into their own half.

It looked all over, though, when Martin Boyle’s cut back was prodded on by Kevin Nisbet and Irvine poked it home with one Well defender on the line. Replays show he was offside with goalkeeper Kelly behind him.

However, defender Lamie’s cross-cum-shot looped into the far corner and, with Hibs visibly wilting in the Edinburgh sunshine, Watt rose above Boyle to meet a looping Stephen O’Donnell cross.

Boyle had the best chance to win it in extra-time, but the winger’s low drive was blocked by Kelly’s knees and the drama continued with Hibs midfielder Gogic receiving a second yellow card as tempers began to fray.

The goals dried up in extra-time and, after misses from the spot from Mark O’Hara and Steven Lawless, Nisbet had the chance to be Hibs’ hero.

Although the Scotland striker had his effort saved, centre-half Porteous kept his nerve to settle a thriller.

Man of the match – Tony Watt

Goals always seem guaranteed from Hibs at the moment, with Doidge now matching Boyle’s five and edging one ahead of Nisbet’s four in their run of one defeat in their last seven outings – which has included progress to their fourth domestic semi-final in a row.

However, if they are to win the cup for a fourth time and first since ending that famous 114-year wait in 2016, they will surely have to improve on one clean sheet in nine games – that one being achieved against League 2 side Stranraer.

Motherwell will perhaps rue their early lack of supply to striker Cole, who has now not scored in three games after a run of five in five, as they failed to stay on course to celebrate the 30th anniversary of their second and last Scottish Cup triumph with another.

Watt has perhaps been the missing ingredient and the strike partner’s return from injury allowed manager Graham Alexander to return to a favoured formation of three up front that came so close to turning the match around.

Hibernian head coach Jack Ross: “I thought we were really good for 80 minutes of the game. There was a lot of disappointment in not seeing it out.

“We wanted to finish third and win a cup – huge ambition. But we all bought into it, players and staff – and we’ve given ourselves a good chance of doing that.”

Motherwell manager Graham Alexander: “Every defeat is difficult, but when you’ve played so well, come back from the dead and come so close to winning it, to lose on penalties is galling.

“It’s the nature of the competition. We won the last round on penalties and you have to take the rough with the smooth. All I can say is I’m incredibly proud of everyone in a Motherwell shirt, because they were absolutely brilliant.”

Hibernian continue their quest to finish third in the Scottish Premiership next Saturday at home to St Johnstone, while Motherwell host relegation-threatened Kilmarnock, with both games kicking off at 15:00 BST.