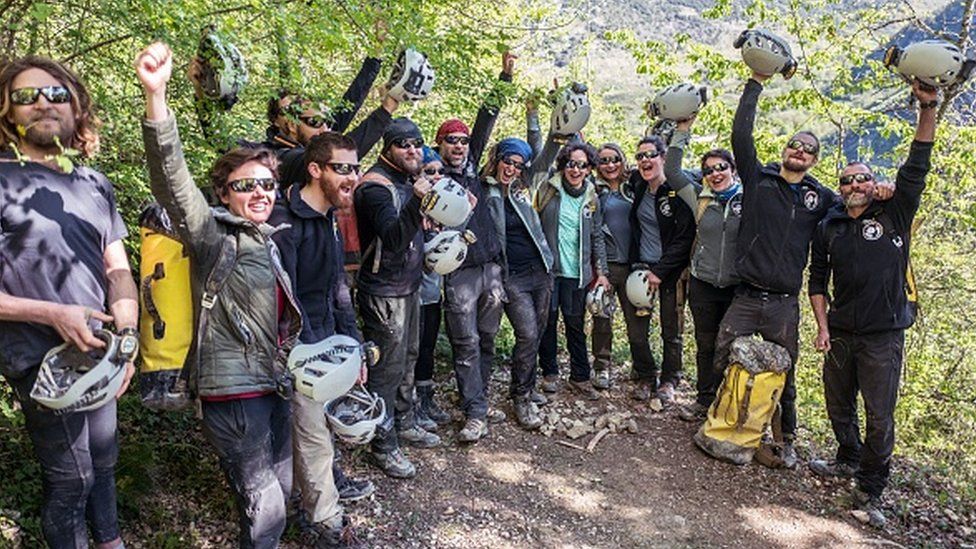 A group of French volunteers have emerged from a cave after a 40-day study exploring the limits of human adaptability to isolation.

The 15 participants lived in the Lombrives cave in south-west France with no phones, clocks or sunlight.

They slept in tents, made their own electricity, and had no contact with the outside world.

The project aimed to test how people respond to losing their sense of time and space.

The so-called Deep Time experiment came to an end on Saturday, allowing the eight men and seven women, aged 27 to 50, who took part to leave the cave.

Scientists overseeing the project entered the cave a day earlier to tell them the project was nearing its end.

Smiling but appearing dazed, the group left their voluntary isolation to a round of applause. They wore sunglasses to give their eyes time to adjust to the sunlight.

The director of the project, French-Swiss explorer Christian Clot, said time seemed to pass more slowly in the cave. For most participants, he said, it felt like “we had walked into the cave 30 days ago”.

One volunteer, Marina Lançon, 33, said the experiment “was like pressing pause” on life.

During their isolation, the group had to organise tasks without being able to use a measure of time to create deadlines.

Instead, they had to rely on their body clocks and sleep cycles to structure their days.

In the cave, they had few modern comforts at their disposal. For example, volunteers had to generate their own electricity with a pedal bike and draw water from a well 45 m (146 ft) below the earth.

The scientists behind the project say it will help them understand how people can adapt to extreme living conditions.

The brain activity and cognitive function of volunteers was analysed before they entered the cave, to gather data for comparative studies after they left.

The purpose of the study has particular relevance during the coronavirus pandemic, a time when lockdown measures have confined millions of people to isolation.

“Our future as humans on this planet will evolve,” Mr Clot said. “We must learn to better understand how our brains are capable of finding new solutions, whatever the situation.”