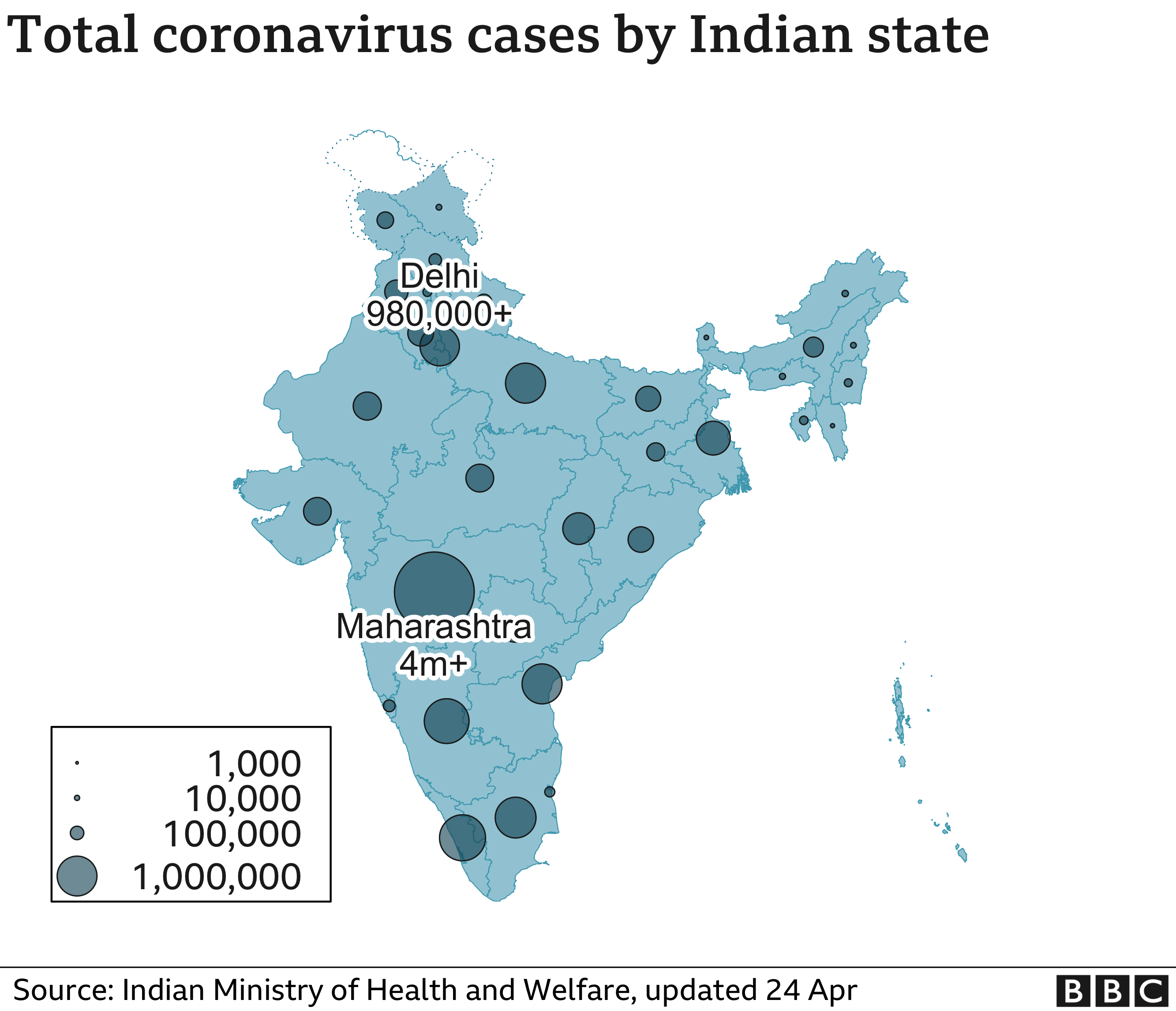 India has registered a new world record for daily coronavirus infections for the fourth day in a row, placing more strain on its crisis-hit hospitals.

It recorded a further 349,691 cases on Sunday, bringing the total to almost 17 million since the pandemic began.

Overcrowded hospitals are struggling to secure enough oxygen, leading to patients being turned away.

On Saturday the US said it was deeply concerned by India’s surge in cases.

Secretary of State Antony Blinken said the US was working closely with the Indian government to send more support and supplies.

The Indian government is deploying trains and the air force to transport supplies to hard-hit areas.

The situation is particularly acute in the capital Delhi, where people have been dying in hospitals because of lack of oxygen.

The World Health Organization (WHO) said the situation in India was a “devastating reminder” of what the coronavirus could do.

The number of deaths across India rose by 2,767 in the 24 hours to Sunday – the highest daily number so far.

Earlier this year, the Indian government believed it had beaten the virus. New cases fell to 11,000 by mid-February, vaccines were being exported, and in March the health minister said India was “in the endgame” of the pandemic.

However, since then, a new surge has erupted, driven by the emergence of new variants, as well as mass gatherings, such as the Kumbh Mela festival, which drew millions of pilgrims earlier this month.

Hospitals in Delhi have warned they are at breaking point. At the Holy Family Hospital, intensive care units are full and there is no room for any more beds.

“Almost every hospital is on the edge. If oxygen runs out, there is no leeway for many patients,” Dr Sumit Ray told the BBC.

“Within minutes, they will die. You can see these patients: they’re on ventilators, they require high-flow oxygen. If the oxygen stops, most of them will die.”

At the Jaipur Golden Hospital, a doctor told the BBC the government had allocated 3.6 tonnes of oxygen, to be delivered by 17:00 on Friday.

However, the supply – a fraction of what was promised – only arrived at midnight, he told the BBC.

“All of the country’s oxygen plants should immediately be taken over by the government through the army,” he said.

A virologist at the Christian Medical College in the city of Vellore in southern India, Gagandeep Kang, told the BBC more action was needed to stop the spread of the virus.

“We need to ensure that there are no non-essential activities taking place. You know what Indian weddings are like, and restricting the size of gatherings, whether it is for family reasons, other social reasons or for business or for political rallies. All of that really needs to stop,” she told the BBC.

“I don’t think a national lockdown is required, but I think that in places that are showing a rise in cases, we do need to intervene with greater stringency than we have done in the past.”

How have you been affected by coronavirus in India? Tell us your story by emailing: haveyoursay@bbc.co.uk.