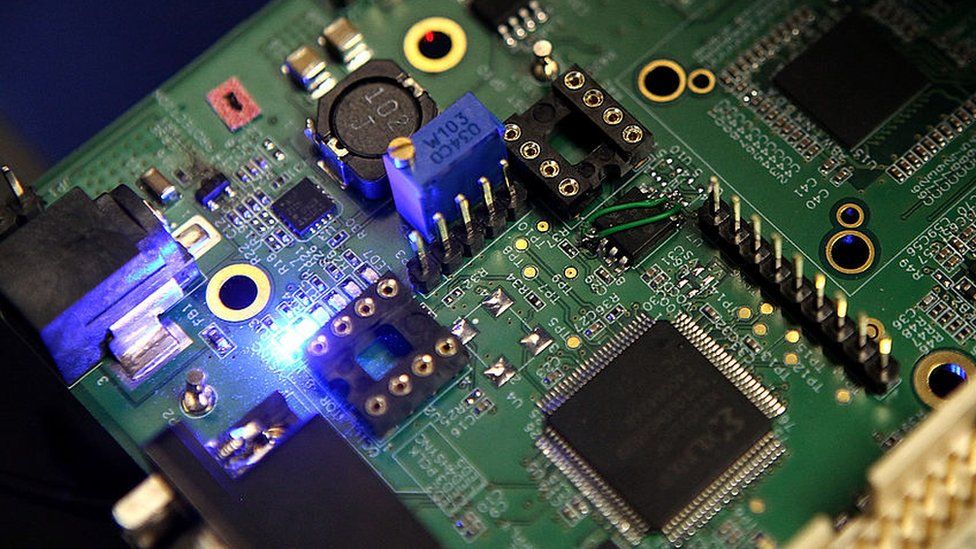 The boss of networking giant Cisco has said the shortage of computer chips is set to last for most of this year.

Many firms have seen production delayed because of a lack of semiconductors, triggered by the Covid pandemic and exacerbated by other factors.

Cisco chief Chuck Robbins told the BBC: “We think we’ve got another six months to get through the short term.

“The providers are building out more capacity. And that’ll get better and better over the next 12 to 18 months.”

That expansion of capacity will be crucial as advances in technology – including 5G, cloud computing, the internet of things and artificial intelligence – drive a big increase in demand.

Mr Robbins is the latest tech boss to weigh in on the debate – and with 85% of internet traffic using Cisco’s systems, his opinion matters.

“Right now, it is a big problem,” he says, “because semiconductors go in virtually everything.”

The seemingly insatiable demand is why major US manufacturer Intel announced a $20bn (£14.5bn) plan to significantly expand production, including two new plants in Arizona.

According to Dan Ives, a tech analyst at investment firm Wedbush Securities, current “demand is probably 25% higher than anyone would have expected”.

Even though the shortage “is going to be an issue for the next three to six months”, technology share prices are doing well because investors are focused on the growing long-term demand for their products.

US President Joe Biden also sees this as a long-term issue and used a White House summit with business leaders this month to urge them to make the country a world leader in computer chips. Amid the trade and technology war with China, the White House says it is “a top and immediate priority”.

European politicians also want more chips made locally, a view partly driven by concerns over China’s desire to achieve reunification with Taiwan. Meanwhile, China has seen a huge growth in domestic demand for chips to power new technology, but has only a small share of global manufacturing capacity.

Mr Robbins says: “I think that it doesn’t necessarily matter where they’re made, as long as you have multiple sources.”

However, Intel chief executive Pat Gelsinger told the BBC it was not “palatable” to have so many chips made in Asia.

TSMC appears intent on holding on to its position as the world’s biggest contract manufacturer and is spending $100bn to expand capacity over the next three years.

This week its founder, Morris Chang, called on the Taiwanese government to “keep hold of it tightly“, arguing it is better positioned to make chips than the US or China, despite their big government subsidies.

The chip shortage was heightened by the coronavirus pandemic. At first, many companies cut their orders for chips, thinking demand would fall, which led suppliers to reduce capacity. However, demand for consumer electronics rose during the pandemic.

The problems have been worsened by a string of other factors, including a fire at a semiconductor factory and weather issues.

This, combined with a “generational technological change has created an unprecedented situation for the industry”, according to Paul Triolo, who leads the geo-technology practice at consultancy Eurasia Group.

He thinks it doesn’t matter where chips are made as long as there is a diversity of supply. However, the shortages are likely “to persist for some time” and longer-term solutions are needed to address the concentration of manufacturing of semiconductors, which is a “problem that predates the shortage”.

That is why Mr Robbins says: “What we don’t want is to have consolidation where any of the risks that we may face could, frankly, result in the situation we’re seeing today, whether it’s weather-related disaster risks, whether it’s single point of failure risk, whether its geopolitical risks, whatever those are. We just need more options, I think, for where semiconductors are built.”

Cisco recently completed the $4.5bn acquisition of Acacia Communications, which, among other things, designs computer chips. Mr Robbins ruled out Cisco using it as an opportunity to start making its own chips.

“We’re not a semiconductor fab company, so it’s not a core competency for us to do that. So we think that companies that play in this space are much better equipped, we’re working very closely with them.”

The huge cost of chip manufacturing facilities means they operate at near full capacity and so it will take time to meet the increased demand.

The size of that demand “is not clear”, according to Mr Triolo. He says that, like other major technology vendors, “Cisco’s equipment relies heavily on reliable supply chains for a range of semiconductors.”

The shortages, he says, have been “exacerbated by companies over ordering components to build up inventory, afraid of being caught short again”.