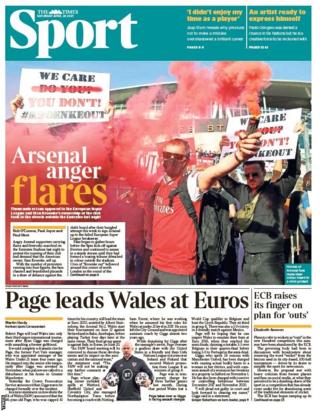 Liverpool have agreed personal terms with RB Leipzig for French defender Ibrahima Konate, 21, whose release clause from the Bundesliga club is £34m. (Fabrizio Romano via Sun)

Barcelona president Joan Laporta is working on a three-year contract to offer to Argentina striker Lionel Messi in an attempt to persuade the 33-year-old to stay at the club. (ESPN)

Juventus and Portugal forward Cristiano Ronaldo, 36, is keen on a return to Manchester United this summer. (Gazetta dello Sport via Metro)

Everton’s Norwegian striker Josh King is in talks with Turkish side Galatasaray and the 29-year-old seems set to leave the club this summer. (Football Insider)

Arsenal are worried that they could lose Norwegian playmaker Martin Odegaard, 22, who is on loan from Real Madrid, as a result of withdrawing from the European Super League. (Sun)

Barcelona are trying to bring French midfielder Kays Ruiz-Atil back to the club with the 18-year-old’s contract at Paris St-Germain expiring at the end of the season. (Mundo Deportivo – in Spanish)

Manchester United’s third-choice goalkeeper Lee Grant, 38, is set to leave the club this summer with the Englishman feeling that the club have reneged on the offer of a new contract. (Mail)

Newcastle will need to pay Arsenal in the region of £20m to sign 21-year-old English midfielder Joe Willock on a permanent deal. (Telegraph – subscription required)

Leeds owner Andrea Radrizzani hopes manager Marcelo Bielsa will extend his contract at Elland Road before the end of this season. (L’Equipe – in French)

Aston Villa’s English midfielder Carney Chukwuemeka, 17, is being tracked by a number of Premier League clubs including Manchester United and Manchester City. (Guardian)

Manchester City’s Portuguese defender Pedro Porro, 21, who is currently on loan at Sporting Lisbon, is attracting interest from Real Madrid. (AS – in Spanish)