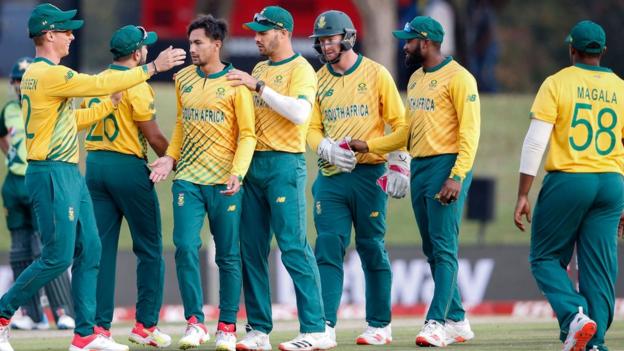 Cricket South Africa has been stripped of its right to administer the sport in the country by sports minister Nathi Mthethwa – a move which puts the participation of both the men’s and women’s teams in international matches at risk.

CSA has been involved in a number of ongoing wrangles about its leadership and structure for many months, resisting efforts to install more independent directors – seen as critical to tackling corruption.

“I have decided to invoke my powers by de-funding and de-recognising CSA‚” Mthethwa said in a letter to CSA.

CSA’s interim board responded by saying it is a “sad day” for cricket in the country.

Mthethwa’s letter added that he would be informing the ICC of his decision “and provide them with my reasons for doing so”.

Were CSA to be derecognised, it could mean that South Africa’s cricketers would not be allowed to play in international matches.

Like most sporting governing bodies, the ICC has strict rules that prohibit government intervention in the running of national sports associations.

The current problems stem from efforts to change the structure of CSA – making sure that the majority of board members are not from the provincial unions in the country.

A meeting last Saturday was meant to see this agreed, but the proposal did not gain the required support.

Stavros Nicolaou, chairman of the interim board, confirmed in a statement on Friday that the board had received correspondence from Mthethwa.

“It is indeed a very sad day for our country, for cricket, for the millions of fans who love the game and the sponsors who have committed to cricket and its grassroots development,” he said.

“But it is a specifically sad day for the players, staff and others whose livelihoods are at stake.”

South Africa’s men’s team are scheduled to next play Ireland in July in a three-match ODI tournament, while the women’s team do not have any firm fixtures until March 2022 at the Women’s World Cup.

If it fails to do so, it risks being banned and losing its government funding. It would also lose its official recognition worldwide, and the South African men’s and women’s teams could lose their national status.

Cricket SA has been plagued by allegations of maladministration and a lack of transformation.

Back in 2019 a number of its top officials had to step down amid corruption accusations – forcing the country’s sports federation to take over its running.

Cricket is one of the most lucrative and well-loved sports in South Africa, and its scandals have left not only the players worried but cricket fans too.