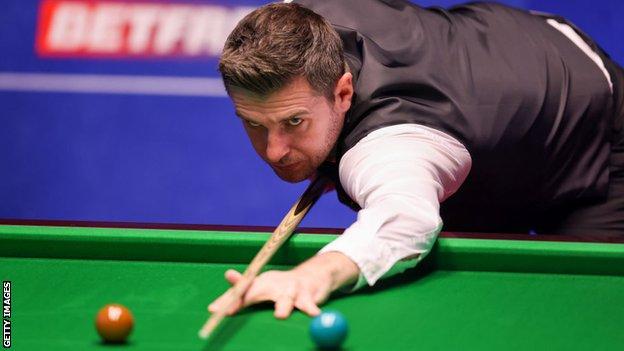 Elsewhere, there were first-round wins for both Shaun Murphy and Mark Selby.

McGill’s comeback should have been even sweeter. The two-time ranking event winner, a Crucible semi-finalist last year, was in prime position to make a 147 in frame seven, but left the black agonisingly sitting over the pocket on 97.

It would have been just the 12th maximum in Crucible history and earned him £40,000, plus at least a share of the tournament high score prize of £15,000.

The best-of-25 frame match resumes on Friday morning and plays to a finish on Friday evening.

Shaun Murphy fought back from 5-3 down to secure his place in the last 16 with a 10-7 win over over Mark Davis.

Davis, 48, was making his 12th appearance at snooker’s showpiece event and outplayed the out-of-sorts 2005 champion in the opening session.

But Murphy, buoyed by a century in the final frame, reduced the gap to 5-4 and was much improved on the resumption.

Breaks of 56 and 92 and helped him win four of the next five frames for an 8-6 lead and, after sharing the next two, the world seven number got over the line with stunning 131.

“I got out of jail,” said Murphy, who faces China’s Yan Bingtao, the reigning Masters champion, in round two.

“Mark always plays the right shot and he is so, so hard to beat. I knew I needed a fast start today. It’s a big victory and I’m thrilled with how I finished it “

Three-time champion Mark Selby joined Murphy in the second round with a devastating 10-1 demolition of qualifier Kurt Maflin.

Selby, 37, needed just two frames to progress having scored two tons and six further breaks of more than 50 in a one-sided opening session against a player who reached the Crucible quarter-finals last season.

Maflin, the world number 25, should have got a second frame on the board at 9-1 down, but missed the final black and left it over the pocket for Selby.

“I did the damage yesterday so it was a strange mindset coming into the second session,” Selby said.

“The first round is always the hardest. You never feel part of the tournament until you get it out of the way. This season I have played as good as I can play – overall it has been a great season.”

The Australian led with a half-century, but a break of 85 helped Lisowski edge ahead.

Robertson responded in style though, levelling the match in a tense sixth frame and taking the final two frames of the session with scores of 135 and 76.

They play the second of their three scheduled sessions on Friday afternoon.