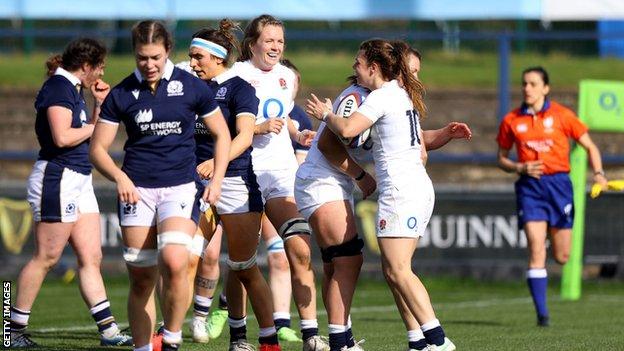 The 2021 Women’s Six Nations will draw to a close on finals day on Saturday with England and France meeting to determine the tournament winner.

The adjusted format and April window, away from the men’s tournament, was created due to the pandemic.

However, contrasting investment into women’s Test sides from unions has been highlighted by the gap between England and France, and then the rest.

So, how should the Women’s Six Nations evolve from here?

Would you keep the new April window for the Women’s Six Nations?

Fiona Coghlan: “As much as I love the tradition around the Six Nations, the move to the April window appears to be all positive. The weather has been better. The level of media coverage has been very good on all platforms. The accessibility to all the games has been great.”

Scrum Queens writers: “Yes. The club season does not have to have a huge hole in the middle of it, games are played in decent weather and there has definitely been more media interest because there is so little other Test rugby happening at the same time.”

Danielle Waterman: “Having a separate window to the men’s Six Nations is a real positive. Although I don’t think it has been good to have the first two rounds clash with the Heineken Champions Cup knockout weekends.

“I also think the women’s domestic calendars will need to be adjusted as it is very close to the end of the club season.”

Gemma Hallett: “Initially I wasn’t in favour and questioned the merit of disassociating from the greatest rugby championship and the power of that brand.

“But we’ve seen much greater coverage, more conversations and some great rugby in far better conditions. Ultimately, I think it should be the players’ decision, but yes I am now an advocate for it.”

Gemma Hallett: “Wales, Scotland, Italy and Ireland need as many games as possible. I would like to see it revert to its traditional format. The beauty of the Six Nations is if you slip up this year, you’ve got the opportunity again next year, you’ll owe them one and get to go again.

“Taking Test matches away from these nations will be a backwards step.”

Fiona Coghlan: “Get rid of the 2021 format. In the past I loved playing the other five countries, but I would be open to suggestions how the game could be expanded and grown.

“There is a need to get as many international games in as possible, not reduce the number.”

Danielle Waterman: “I am undecided. I love the deep history of the Six Nations but also don’t know if this format is hindering the progression of the women’s game.

“I am really looking forward to there being a finals weekend but perhaps this is also because we have rarely had all three of the games spread out on the same day.”

Scrum Queens writers: “We’d like to see the format of the competition change, but teams to play at least the same number of games as before.

“The Six Nations is a great competition for the teams who are in it, but it does nothing to develop European Test rugby as a whole. There is a golden opportunity now for the women’s game to do something different.”

Is it right to keep asking Italy, Ireland, Scotland and Wales to play England and France on a regular basis while the investment in their women’s programmes is so different?

Danielle Waterman: “Yes. I think each time these countries play England and France they raise their game and scorelines often don’t reflect the battle the players have on the field.”

Gemma Hallett: “I think the question should be, ‘is it right of the unions to under-invest in their teams and pathways knowing they have to play England and France on a regular basis?’

“Then my answer would be no. As a Welsh girl, we have to keep playing the best, to measure where we are and keep asking questions of and demand more support from the Welsh Rugby Union.”

Fiona Coghlan: “If you ask any player, they will want to challenge themselves against the best to see where they stand.

“On the other side of the argument, for fans and the potential new audience to the game, we need the matches to be competitive to generate and keep interest.”

Scrum Queens writers: “The problem here is that the solution now requires the sort of investments that in a post-pandemic world, will be very difficult.

“Financial investment is clearly important, but this is more than just about money. It is about having vision and patience for the women’s game and acknowledging past mistakes – for example once upon a time Wales used to have age-group teams that could beat England, USA and Canada regularly.

“Today it has no age-group structure at all.”

Who have been the unexpected stars of the Women’s Six Nations so far?