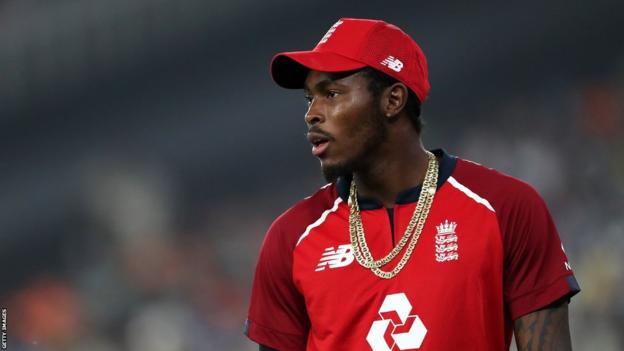 England fast bowler Jofra Archer will miss the current Indian Premier League to focus on his recovery from injury.

The 26-year-old was scheduled to play for Rajasthan Royals in the competition, which runs until 30 May.

He returned to training last week after surgery on a hand injury sustained while cleaning a fish tank.

Taking part in the IPL would have meant Archer spending eight days in quarantine in India.

He will instead resume training full-time with Sussex next week and could return to action in a second XI match in May.

Archer sustained the hand injury in January, before England’s tour of India, where he played in two of the four Tests and all five Twenty20s.

He also had an injection in March on a longstanding elbow problem.

Archer is the third England and Royals player to be ruled out of the IPL after all-rounder Ben Stokes broke a finger and batsman Liam Livingstone left the squad with “bubble fatigue”.

England begin their international summer with a two-Test series against New Zealand starting on 2 June at Lord’s.