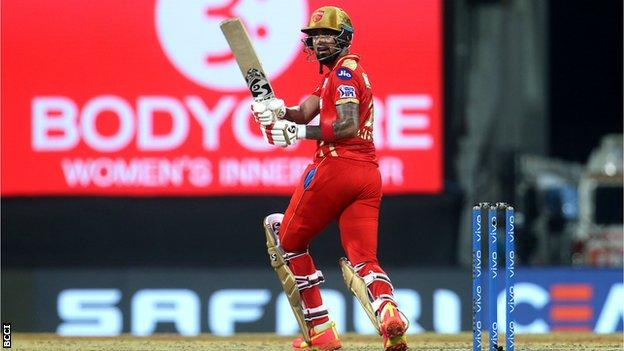 The Kings captain shared an unbeaten 79-run partnership with Chris Gayle, who made 43 not out as they chased down 132 with 2.2 overs to spare in Chennai.

The five-time winners have now lost three of their five matches in this season’s competition.

Having lost the toss and been asked to bat, Mumbai’s top -order struggled to find any fluency.

The IPL’s most successful team were only 21-1 after six overs, their second lowest powerplay score.

However, a 79-run partnership between Rohit and Suryakumar Yadav (33) offered some hope for Mumbai.

Rohit played a watchful and composed 52-ball knock before he was dismissed by seamer Mohammed Shami.

Shami and leg-spinner Ravi Bishnoi were the pick of the Punjab bowlers, both taking 2-21 from their four overs.

In reply, Rahul and Mayank Agarwal got off to a quick start, adding 53 for the first wicket before Mayank (25) was dismissed by leg-spinner Rahul Chahar in the eighth over.

Chahar finished with 1-19 and off-spinner Jayant Yadav 0-20 from his four overs as the pair put the brakes on the Kings innings.

But Rahul and West Indies veteran Gayle batted patiently, capitalising on any wayward bowling to give Punjab their second win of the tournament.