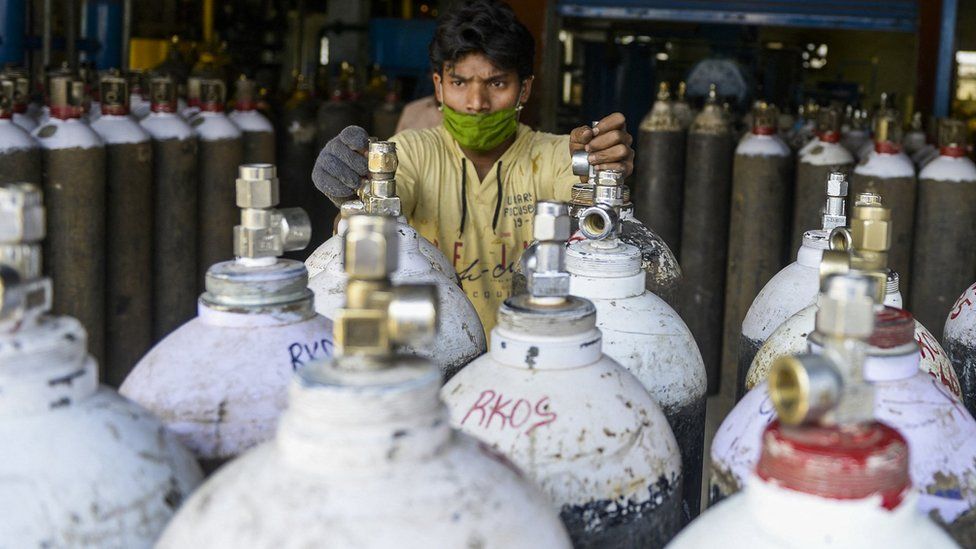 Families are left pleading for their relatives who are desperately ill, with some patients left untreated for hours.

On Friday India reported 332,730 new cases of coronavirus, setting a world record for a second day running. Deaths were numbered at 2,263 in 24 hours.

Dr Atul Gogia, a consultant at the Sir Ganga Ram hospital in Delhi, told the BBC there had been a “huge surge” in patients, leaving no space in the emergency room.

“We do not have that many oxygen points. Whatever oxygen points are there, they’re full. Patients are coming in with their own oxygen cylinders or without oxygen. We want to help them but there are not enough beds and not enough oxygen points even to supply them oxygen if it is there,” he said.

“All our telephone lines are jammed. People are continuously calling the helpline. There is a big rush outside the hospital: there are ambulances parked, patients wanting to get deboarded, but the problem is, there is no space.

“We try to mobilise, we try to discharge patients who become stable as early as possible so that we can increase the turnaround, but things are difficult right now.”

Maharashtra, the worst-hit state in the country, faces an oxygen shortfall. In the state capital, Mumbai, at least 13 patients died after a fire broke out in an intensive care unit of a hospital treating Covid patients.

Two days earlier, 24 Covid patients died in another part of the state after a leak interrupted the flow of oxygen to their ventilators.

On Friday morning, Max Healthcare, which runs 10 private hospitals around Delhi, put out an “SOS” message, saying it had less than an hour’s supply remaining at two of its sites.

Three other states – Gujarat, Uttar Pradesh and Haryana – are also facing a critical shortage. The Indian Air Force is being used to lift oxygen tankers and supplies to different parts of the country.

Why are cases so high in India?

Cases have surged during India’s second wave, driven by a number of factors. Health protocols have been lax, with mask mandates sporadically enforced.

Millions of people attended a Hindu festival, the Kumbh Mela, which culminated 10 days ago with a mass dip in the River Ganges. New strains of the virus have emerged, including a “double mutant” strain.

Dr Saswati Sinha, a critical care specialist in the eastern city of Kolkata, said emergency rooms and wards were packed to capacity.

“We are getting direct calls from our patients, our acquaintances, our neighbours: they are pleading with us to be able to accommodate some of their next of kin. But unfortunately, our situation is such that, although we are trying our best, we still have a huge number of patients whom we are not able to accommodate,” she told the BBC.

“In 20 years of working in intensive care, I have never seen anything of this kind, ever.”

Indian Prime Minister Narendra Modi has been holding meetings with chief ministers of the most affected states and oxygen manufacturers.