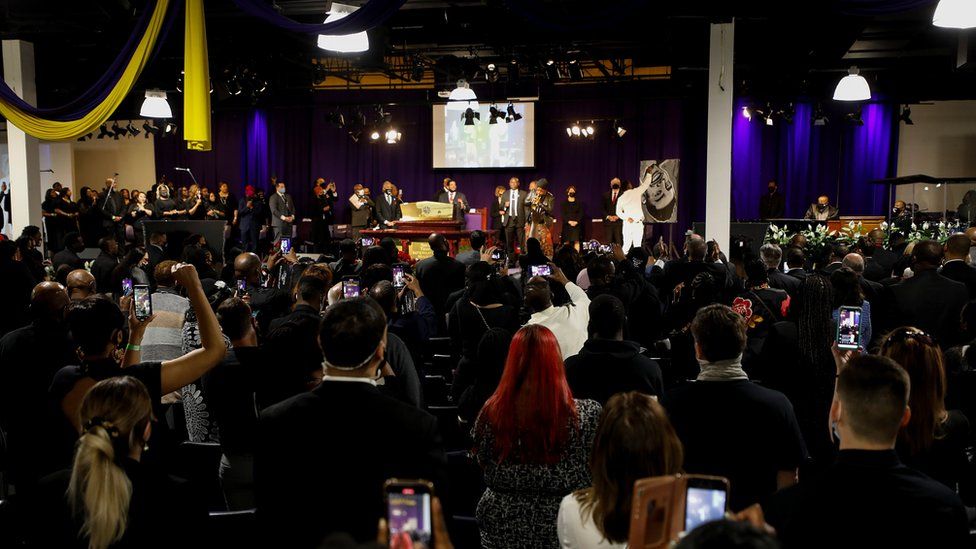 Hundreds of mourners, including family members and activists, have attended the funeral of a black man who was shot dead by police in Minneapolis.

Daunte Wright, 20, was killed during a routine traffic stop in the Brooklyn City suburb of the city on 11 April.

The city was already on edge amid the high-profile trial of a white ex-police officer accused of murdering African-American George Floyd last year.

That officer, Derek Chauvin, was convicted of murder on Tuesday.

The spate of incidents in Minneapolis have triggered national outrage and widespread protests. They also prompted the US justice department to launch an investigation into the practices and conduct of the city’s police department.

The investigation will examine whether there has been a pattern “of unconstitutional or unlawful policing” in Minneapolis, Attorney General Merrick Garland said earlier this week.

What’s happening at the funeral?

Hundreds of mourners, many wearing facemasks due to the coronavirus pandemic, gathered at a historically black church in the north of the the city on Thursday afternoon to remember Mr Wright.

The Reverend Al Sharpton, a veteran civil rights leader, delivered the eulogy at the Shiloh Temple International Ministries, just as he did at Mr Floyd’s funeral last year.

Rev Sharpton spoke about the rallying cry “no justice, no peace” that has been chanted at civil rights protests for decades. “It became the chant of our movement,” he said. “The absence of justice is the absence of peace.”

“Peace is the presence of justice,” he continued. “You can’t tell us to shut up and suffer. We must speak up when there is an injustice.”

Katie Wright, Mr Wright’s mother, remembered her son as a loving father before becoming so overcome with emotion that she had to cut her tribute short.

“My son had a smile that was worth a million dollars. When he walked in the room he lit up the room,” she told mourners through tears.

“I remember when Daunte first became a father – his son was born at 28 weeks so he was premature. The joy that Junior brought to Daunte’s life was truly amazing.

“He was so happy and so proud, and he always said he couldn’t wait to make his son proud. Junior was the joy of his life, he lived for him every single day.”

The Reverend Jesse Jackson, also a civil rights leader, attended the funeral, as did Ben Crump, the lawyer representing the families of both Mr Wright and Mr Floyd.

On Wednesday hundreds of people attended a public viewing of Mr Wright’s open casket, which was covered in red roses at the Shiloh Temple International Ministries.

Minnesota Governor Tim Walz also called on residents of the state to conduct two minutes of silence at the start of the funeral. He said Mr Wright’s death was connected to the “deep, systemic racism” faced by black Americans.

United in grief and outrage

Every time I have seen Daunte Wright’s mother, Katie, she has been in tears. At his funeral service today, she was overcome with emotion and cut short her tribute.

As the civil rights attorney Ben Crump told the church – this is a fraternity that no family wants to belong to. But he said the family of George Floyd had become “comforters” for the Wright family.

They are all here; united in their grief and outrage. Daunte Wright lies peacefully in his white casket surrounded by roses, a flower that was plucked from his family’s garden.

In the funeral programme, the 20-year-old’s life history is just four paragraphs long. But his elder brother said how proud he was of the man he was becoming.

What happened to Daunte Wright?

Police said they stopped Mr Wright for having an expired tag on his car licence plate, but then tried to arrest him on an outstanding warrant. Family members say he was racially profiled.

Police then released body camera footage that showed Mr Wright fleeing from officers after they told him he was being arrested for an outstanding warrant.

As Mr Wright re-entered his car, Officer Potter can be heard shouting “Taser” several times before firing a shot.

The police claim the officer meant to shoot her Taser, not her gun.

Since the shooting the officer who killed Mr Wright, Kim Potter, has resigned and been charged with second-degree manslaughter.