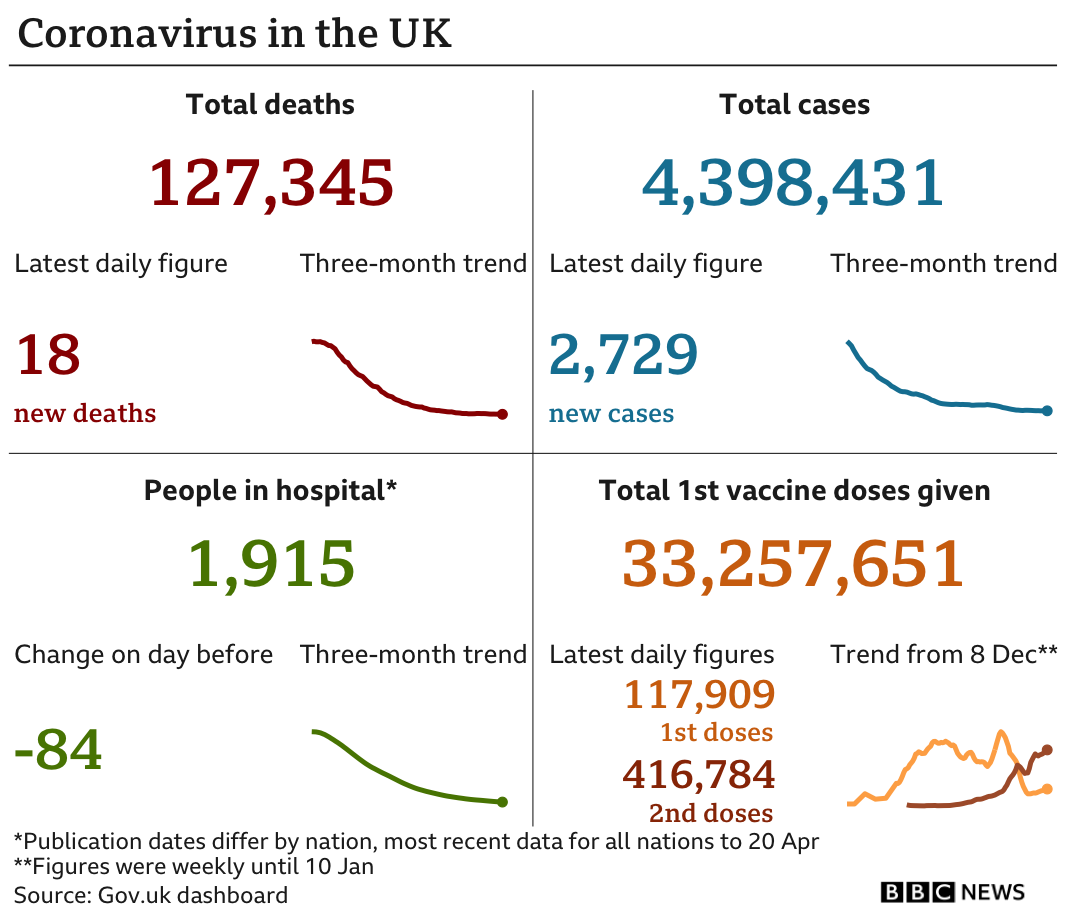 British and Irish nationals can travel to the UK from India, but they must now isolate in a government-approved hotel.

India has seen soaring infection rates, a rapidly rising death toll and the discovery of a new virus variant.

The spike has overwhelmed hospitals, creating a critical shortage of oxygen, intensive care beds and ventilators.

On Friday, India recorded 332,730 coronavirus cases, the highest one-day tally anywhere in the world for the second day in a row. Daily deaths from Covid-19 rose by a record 2,263 in the previous 24 hours.

The rising number of cases has resulted in a deepening healthcare crisis that has gripped several states, and India’s top court has asked the central government for a national plan by Friday on bolstering supply, oxygen, medicine, treatment and vaccines.

Nayan Gangyan is facing a 10-day hotel quarantine when he flies back to London from northern India on Saturday. He travelled to Chandigarh a few weeks ago, when his parents both contracted coronavirus.

He told BBC Breakfast he was left feeling “helpless” in the UK when his father’s oxygen levels dropped, there were no beds available in hospital and his mother started to panic.

“It was at that point that I decided ‘my family needs help and I need to go back come what may’,” he says.

He says the situation in India is “really bad”, with the government healthcare system “completely overrun”. But they eventually managed to get his father admitted to a hospital where he had previously undergone a liver transplant, and he is doing “much better now”.

Now Nayan is preparing to return home to London. “The flight as of now, it’s running. I really hope that it does take off,” he says.

“I’ve already booked my quarantine hotel so I’ll be going straight there. I’ll be landing [then] straight to the hotel and 10 days in the room.”

His wife Vani, who has been watching from a distance from their London home, says it has been difficult “not to be able to control or influence” events.

On India’s red list status, she says: “We got just over three days’ notice so very little time for us to actually affect the outcome or do anything.

“We’re just in the position where we have to be okay. After Nayan’s ordeal in India he has to go through another ordeal.”

Tina Patel and her husband arrived back in the UK on Thursday from Pune, Maharashtra, after travelling to India in March to visit her father-in-law, who was ill due to old age and later died.

She told the BBC people in the city were “desperate” – trying to find hospital beds or a slot in the crematoriums. “We left a city with ambulances wailing away day and night,” she said.

“I left broken-hearted as there was nothing we could do but catch the BA flight last night and all we could do was to be thankful that we finally got home.”

Friday’s travel rule change means direct flights from India are still permitted, but UK and Irish nationals, as well as those with residency rights, must isolate in government-approved hotels – at their own cost – for 10 days.

Travel to the UK is banned for all others who have been in red-list countries in the past 10 days.

There are 40 countries on the government’s red list across the Middle East, Africa, Asia and South America. Countries can be added to the list with just a few hours’ notice.

The final scheduled commercial flight ahead of the rule change – Vistara flight VTI017 – landed at London’s Heathrow Airport at 18:48 on Thursday, according to FlightRadar24.

Heathrow bosses are believed to have declined the requests to ensure pressures at the border, reported in recent weeks, were not exacerbated.

Have you been affected by the issues in this story? Please share your story by emailing haveyoursay@bbc.co.uk.