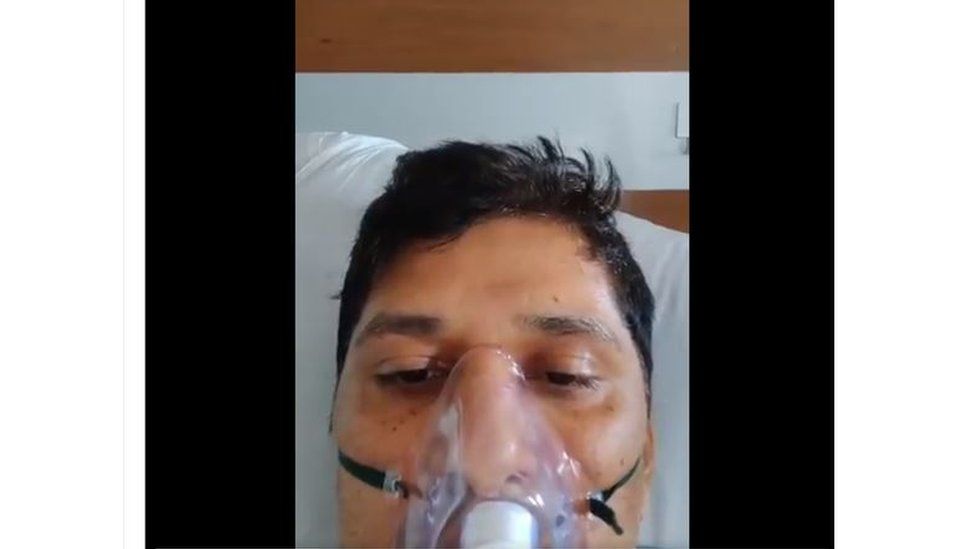 Six hospitals in the Indian capital Delhi have completely run out of oxygen and doctors say other hospitals have just a few hours’ worth of supply left.

A number of people have died while waiting for oxygen, and more than 99% of all intensive care beds are full.

India is in the grips of a second wave of Covid infections and on Thursday recorded the highest one-day tally of new cases anywhere in the world.

The country has recorded close to 16 million confirmed infections.

There have been reports of state authorities stopping oxygen tankers from travelling to other states, according to Delhi television station NDTV. Some facilities have been accused of hoarding their supplies.

“A lot of people are dependent on oxygen and without oxygen, these people will die just like fish die in the absence of water,” he said. “This is a time for all to come together to work.”

Delhi is known to have among the best healthcare facilities in India, but it has been brought to its knees by the latest surge in cases, says BBC India correspondent Yogita Limaye.

Families are also waiting hours to perform funeral rites, Reuters news agency reports, with at least one Delhi crematorium resorting to building pyres in its car park in order to cope with the numbers arriving. Crematoriums are holding mass cremations, and working day and night in several cities.

A doctor working in a government hospital in the south of India, who wished to remain anonymous, said tensions were running high.

“Patients are trying to hit doctors,” they told the BBC. “They are blaming doctors for everything and even the [hospital] management is also blaming the doctors. It’s a stressful environment.”

“We have presently almost used 99% of oxygen ports – only 1% is left. It’s a very pathetic situation.”

Sukhbinder Singh lives in Leicester in the UK and told the BBC that his mother, 90-year-old Harbans Kaur, died on Wednesday in Delhi after she and seven members of his family tested positive for Covid-19.

A nursing home refused to admit Ms Kaur without a family member to care for her, but no-one was well enough to do so and she had to stay at home.

“After several phone calls and pleading, I managed to organised the cremation through a charity for my mother, which was carried out with some usual rituals,” he added. “But there were no final farewells by family and the memory of her death is very difficult to deal with mentally.”

Mr Singh’s brother and sister-in-law were admitted to hospital in Delhi, and using his contacts in India, he was finally able to secure the medicine and oxygen they needed – although he said he struggled in part because of rising medicine costs due to the black market.

“My lower-middle-class family is not rich to afford big private hospital fees and treatment costs. What about poor daily wagers who can’t even afford paracetamol?”

How did it get so bad?

In January, the pandemic was relatively under control, but since then the situation has gone from bad to worse, for a number of reasons.

Political parties have come under criticism for holding huge state election rallies – including one by Prime Minister Narendra Modi – in West Bengal. The government has defended the decision to continue with polling, which is taking place in phases, but India’s election body has now banned campaign rallies.

What action is being taken?

Prime Minister Modi chaired a high-level meeting on Thursday to discuss the oxygen supply issue. According to a government statement, he was told that an “elaborate exercise” is under way, with state governments to identify their needs so they can be supplied with oxygen.

To transport oxygen around the country faster, the canisters are being airlifted and put on direct trains, the statement says.

There is no national lockdown currently in place, and regions are implementing their own rules.

Tougher restrictions have been announced in the worst affected state of Maharashtra, which is India’s richest region and home to its financial hub, Mumbai. It has also been a Covid hotspot since the start of the pandemic, accounting for a quarter of India’s cases.

What is happening with the vaccine drive?

Despite a promising start in January, India’s inoculation drive has been lagging.

Some 130 million doses have so far been administered, but with a population of more than a billion people, it is a small percentage, and the drive has been restricted to health workers, frontline staff, those above the age of 45 and anyone with co-morbidities.

Experts say India is unlikely to meet its target of covering 250 million people by July.