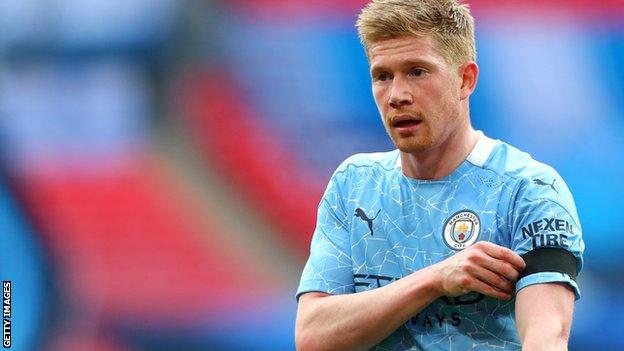 Manchester City could have Kevin de Bruyne and Sergio Aguero available as they look to win the Carabao Cup for a record-equalling eighth time.

Pep Guardiola’s side have won the last three finals and five of the last seven.

Tottenham’s last trophy was the League Cup in 2008 and striker Harry Kane’s chances of playing at Wembley are being monitored “hour by hour”.

Kane missed the midweek win over Southampton with an ankle injury.

‘We want to win this competition’

City have the first leg of the Champions League semi-final with Paris St-Germain looming next week but Guardiola was keen to stress a fourth straight League Cup win is important to him.

“We cannot deny the Champions League is close and the Premier League is not over and they are more important. But we want to win this competition,” Guardiola said.

“For Tottenham, it will be their first title in years and their commitment will be incredible and the quality of their players is extraordinary.”

Belgium midfielder De Bruyne picked up an ankle injury in the FA Cup semi-final defeat to Chelsea last week while Argentina striker Aguero has not played for five matches. Both have trained and are available.

‘Harry won’t put his body on the line’

Even by this week’s hectic standards, Tottenham have been busy, sacking Jose Mourinho on Monday in the midst of the Super League fallout.

Interim boss Ryan Mason will lead the side out at Wembley and hopes to have captain Kane available.

“Kane didn’t train with the team today (Friday) but we’ll have more of an idea tomorrow to see if we can get him back on the pitch,” Mason said.

“It’s a case of taking it hour by hour now. So the days are obviously running out. It’s a case of seeing how he feels in the next four hours, the next six hours, and go from there.