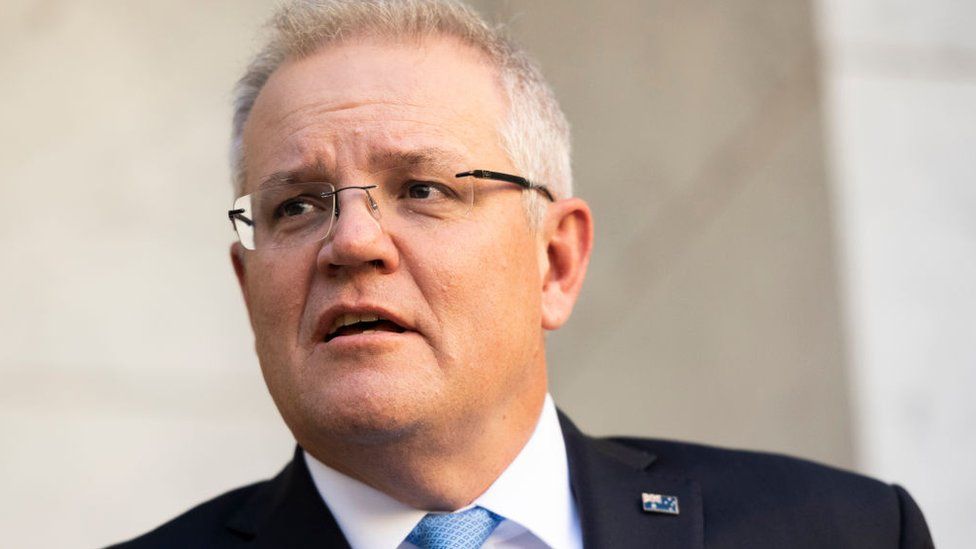 But he stopped short of setting a timeline, saying the country would get there “as soon as possible”.

It came as the US, Canada and Japan set new commitments for steeper cuts.

US President Joe Biden, who chaired the virtual summit, pledged to cut carbon emissions by 50-52% below 2005 levels by the year 2030. This new target essentially doubles the previous US promise.

By contrast, Australia will stick with its existing pledge of cutting carbon emissions by 26%-28% below 2005 levels, by 2030. That’s in line with the Paris climate agreement, though Mr Morrison said Australia was on a pathway to net zero emissions.

“Our goal is to get there as soon as we possibly can, through technology that enables and transforms our industries, not taxes that eliminate them and the jobs and livelihoods they support and create,” he told the summit.

“Future generations… will thank us not for what we have promised, but what we deliver.”

Australia is one of the world’s biggest carbon emitters on a per capita basis. Mr Morrison, who has faced sustained criticism over climate policy, said action to reduce greenhouse gas emissions would focus on technology.

The prime minister said Australia is deploying renewable energy 10 times faster than the global average per person, and has the highest uptake of rooftop solar panels in the world.

“You can always be sure that the commitments Australia makes to reduce greenhouse gas emissions are bankable.”

Australia has seen growing international pressure to step up its efforts to cut emissions and tackle global warming. The country has warmed on average by 1.4 degrees C since national records began in 1910, according to its science and weather agencies. That’s led to an increase in the number of extreme heat events, as well as increased fire danger days.

Ahead of the summit, President Biden’s team urged countries that have been slow to embrace action on climate change to raise their ambition. While many nations heeded the call, big emitters China and India also made no new commitments.

“Scientists tell us that this is the decisive decade – this is the decade we must make decisions that will avoid the worst consequences of the climate crisis,” President Biden said at the summit’s opening address.

Referring to America’s new carbon-cutting pledge, President Biden added: “The signs are unmistakable, the science is undeniable, and the cost of inaction keeps mounting.”