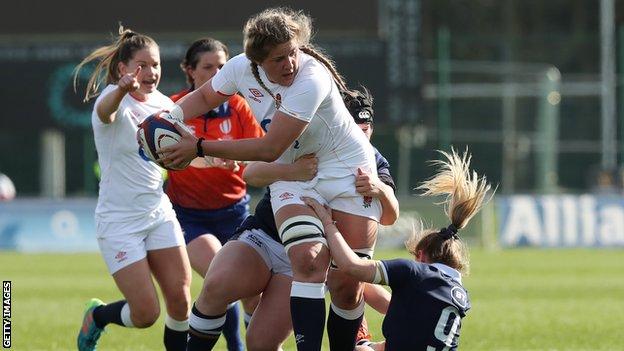 Emily Scarratt will lead the defending champions from outside centre, with Zoe Harrison making her first start of this year’s tournament at 12.

Hunter returned after 13 months out for England’s win in Italy two weeks ago.

As well as a hamstring strain, the 35-year-old had been battling an injury to a nerve in her neck which left her struggling to tie her shoelaces.

But with so little game time, Hunter has struggled to compete with Cleall, who England head coach Simon Middleton agreed was one of the best players in the world after her performance in the Red Roses’ win against Scotland on 3 April.

“It was great to have Sarah Hunter back against Italy,” Middleton said of the change.

“She’s not quite at the level she would want to be and we need [to be] for this game at the moment, which is to be expected and anticipated after 13 months out.

“Poppy has got a really good all-round game. Physically she is in the best shape she has ever been and that has translated on to the field.”

England beat Scotland 52-10 and Italy 67-3 in the group stage to secure their place in the first Women’s Six Nations final after the tournament’s format was changed following the disruption caused by the coronavirus pandemic.

Middleton has largely returned to the side that claimed the opening victory against Scotland, with Sarah McKenna at full-back and Lark Davies starting at hooker.

Abbie Ward is at lock in place of Zoe Aldcroft, who moves into the back row alongside Marlie Packer.

Centre Meg Jones and flanker Alex Matthews have returned to the GB sevens programme and so were unavailable for selection.

Among the replacements, prop Detysha Harper and centre Lagi Tuima are back as England host a French side riding high following a 53-0 win against Wales and 56-15 victory in Ireland.