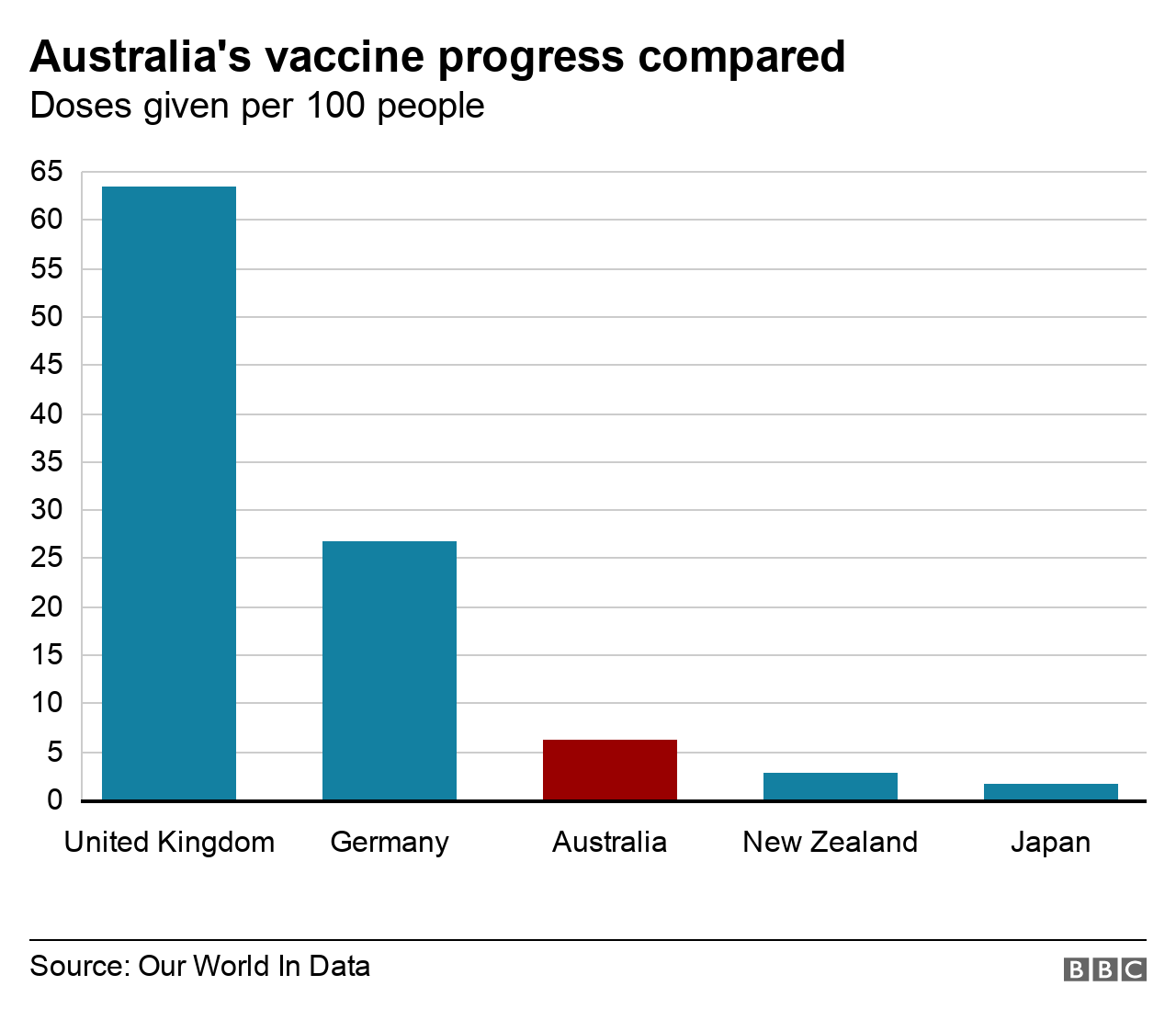 Australia has been one of the world’s success stories in its fight against Covid-19, but frustration is growing over its delayed vaccination rollout.

The country has been slower than most others to immunise its population, with some high-risk groups crying out for protection.

Last month, it fell 85% short of its own target – and the lack of clarity around the process has been criticised.

Supply shortages and delivery problems have been blamed for the delays.

And while steps have been taken to speed up the programme – such as mass immunisation hubs and investment in local production – the government is seeing its success so far in battling Covid tarnished by its sluggish vaccination effort.

How many Australians have been vaccinated?

The rollout began in February and so far 1.6 million vaccine doses have been administered nationwide in a population of 25 million. That’s well short of the four million dose goal originally set for March.

After initially saying all Australians would be fully vaccinated by October, the government kept pushing its timeline. Now, it’s scrapped its target altogether.

Prime Minister Scott Morrison said given the “many uncertainties involved” it was no longer possible to set an end-of-year vaccination goal.

Right now, Australia is in the initial phases of a staged rollout. Doses are currently being offered to people over 70, those in aged care homes, frontline health workers, emergency services workers, Aboriginal and Torres Strait Islander people over 55, and people with underlying health conditions.

Still, many in those high-risk groups in the aged care and disability sector say they haven’t received doses.

Last week, disability services provider Aruma, which runs about 350 group homes for people with severe disabilities, told the ABC that none of its residents or staff members had been vaccinated.

A survey of 254 aged care workers by the United Workers Union found that 85% hadn’t even received their first dose.

“Too much confusion… limited information from government,” one aged care worker from South Australia said. “I do not know of one single person or resident that has had a Covid shot.”

How does Australia compare globally?

A strict policy of lockdowns, border closures and quarantine controls has seen Australia keep infection levels low. The country has recorded 910 deaths and 29,559 cases since the pandemic began – far fewer than many other nations.

On the vaccination front, however, it remains a laggard. According to the latest Our World data, Australia has delivered 6.2 doses per 100 people.

Australia is one of the worst performers in the Organisation for Economic Co-operation and Development (OECD), with only Japan, New Zealand and South Korea holding lower vaccination rates per 100 people.

Why have there been delays?

A big part of the problem has been access to supplies. Australia’s programme is most reliant on the AstraZeneca shot, though Pfizer and Novavax will also be a part of its larger rollout.

The country’s initial efforts in securing vaccines appeared promising. It was among the first to announce an order with AstraZeneca, and also trumpeted its local manufacturing capacity with medical firm CSL.

Early in the rollout, though, confusion over just how much stock Australia had began to circle. A tussle with the European Union led to part of the AstraZeneca order being held back. And a lack of clear, public information has made it difficult to assess supply levels.

At the same time, domestic production hasn’t lived up to expectations. Manufacturing began in March, with the government saying it would soon pump out about one million doses a week. It has so far failed to hit those targets.

Then, issues around a rare blood clotting disorder associated with the AstraZeneca jab, made the situation worse. A woman in her 40s, who had underlying health conditions, developed blood clots and later died after receiving the vaccine.

The government now recommends people under 50 get a Pfizer vaccine. It has said Australia will receive 40 million doses of the Pfizer jab this year, but it’s unclear how many doses are available right now.

Novavax, the last vaccine in the rollout mix, is yet to receive regulatory approval.

Are there any other issues?

Concerns about the AstraZeneca vaccine – the biggest part of its rollout plan – slowed things down and also contributed to some vaccine hesitancy.

Supplies have also been an issue.

Doctors administering vaccines at clinics have spoken out about shortages, while the nation’s general practitioners’ (GP) union had also raised concerns.

At the same time, state and federal government have argued over who is to blame for the delays.

Two state governments – New South Wales and Queensland – have accused the federal government of failing to provide certainty over how many vaccines would be delivered. This, in turn, has slowed down scheduling appointments. There are reports of patients across Australia having difficulties booking slots.

What is being done to speed up the rollout?

The government says things are picking up.

The health minister has boasted of a six-fold increase in total vaccinations in roughly a month since the GP rollout began. Mass vaccination centres have been opened to speed up delivery.

More local production is also possible. The state of Victoria will inject A$50m toward a production facility to make mRNA vaccines – like the Pfizer jab – locally.

Still, any facility would require much more funding and it would take at least a year before any doses could realistically be manufactured.

What are the wider implications of the delays?

Beyond the health concerns, the delay risks economic and social damage.

While Australia has fought the battle against Covid in part due to hard border policies, vaccines have been held up as key to unlocking the gates once more.

Sectors like tourism and aviation are relying on high levels of immunisation to revive business. Failure to get there risks jeopardising the newly opened Australia-New Zealand travel bubble, along with other potential travel hubs with countries such as Singapore.

Australians stranded abroad, already struggling to make it home, may find it even more difficult to do so.