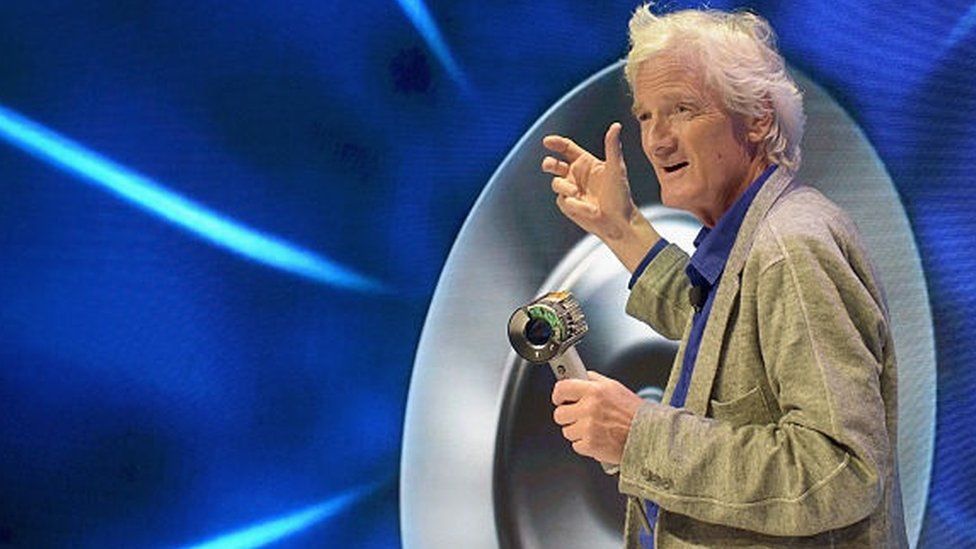 Today he is one of the UK’s richest men and a well-known supporter of Brexit, but how did Sir James Dyson make his fortune?

One day, in the late 1970s, it struck him that the industrial dust extractor at his factory could perhaps be scaled down for use in the home.

The machine in his factory had a potentially blockbuster feature that had never been used in domestic appliances before. It did not need a bag to collect dust; instead it spun air really fast, creating a cyclone that flung dust outwards where it could be collected.

He realised the potential was there for a bag-free and more efficient machine.

Sir James rushed back to his house, dismantled his vacuum cleaner and attached a cyclone device, hastily made from cardboard and sticking tape.

“I started pushing it around the room and it worked,” he told Sue Lawley on Desert Island Discs in 1999.

Four years, and more than 5,000 prototypes later, he had a machine that worked to his satisfaction.

It was not obvious from Sir James’s schooling and early college years that he would become a leading inventor and industrial designer.

Sir James, whose father died when he was a child, grew up in Norfolk in the 1950s. Speaking about his childhood he said, “Money was very unimportant and what was much more important to me, and was a greater gift, was the countryside, the seaside, the sand dunes, the freedom.”

Having studied art at school, he went on to art college in London where the principal suggested that he go into design.

He became influenced by the ideas of US architect and designer Buckminster Fuller, known for elegant domes.

“Here was an engineer creating this engineering structure which was incredibly beautiful, without even trying to be beautiful.

“Its elegance came not from its styling but from its engineering and I latched on to that.”

Inspired by such work, he helped design the Sea Truck, a high-speed boat, built for beach landings.

But Sir James wanted his own project and that came in 1974 – a wheelbarrow that featured a large spherical plastic wheel. The ballbarrow was designed to be easier to fill, empty and manoeuvre than existing barrows.

The invention was a commercial success, but in building the business Sir James lost control to outside investors and it was sold against his wishes.

It was an experience he was determined not to repeat with his next invention, the bagless vacuum cleaner.

By the early 1980s he had a working prototype, but developing it into a commercial product was a gruelling process that took another 10 years and almost bankrupted him.

At one stage he owed his bank more than a million pounds.

“That’s probably why it took me such a long time to get the vacuum cleaner going, because I didn’t have any money. I’ve always been heavily in debt.

“The bank got pretty nervous at times, but they stood by me,” he said.

After some false starts, the first machine sold under the Dyson brand was launched in the UK in 1993 and soon became the biggest selling vacuum cleaner in the country.

Dyson products were made in Wiltshire until 2002, when the firm switched vacuum cleaner production to Malaysia, a move that was unpopular with many at the time, but has proved to be a commercial success.

In recent years Dyson has launched hairdryers, fans and lights and employs14,000 staff worldwide, including around 4,000 in the UK.

That has all translated into healthy profits. The most recent available results from Dyson are from 2019 and show a net profit of £711m, up 17% on the previous year.

It has also made Sir James a very wealthy man. Last year he topped the Sunday Times Rich List for the first time with an estimated fortune of £16.2bn. He is also reported to be the UK’s biggest farmer, owning large amounts of land in Lincolnshire, Oxfordshire and Gloucestershire.

Sir James is one of the most high-profile business leaders to have supported Brexit, and earlier this month told the BBC that leaving the EU had given the UK back its independence and boosted innovation.

His business had been directly affected by European Union regulation.

He fought, and in 2018 won, a long legal battle over the way vacuum cleaners are labelled for energy efficiency in the EU. He had argued that the labels were based on flawed tests.

Yet the pro-Brexit entrepreneur has also been accused of “hypocrisy” after moving Dyson’s global headquarters to Singapore in 2019.

He later said he had to move the company to Asia because Dyson’s British suppliers “didn’t want to expand with us”, adding, “We’re a British company – I’ve put a lot into this country.”

Sir James has supported engineering in the UK through the James Dyson Foundation, which introduces young people to the subject.

The Foundation also runs an annual competition for young engineers and designers.