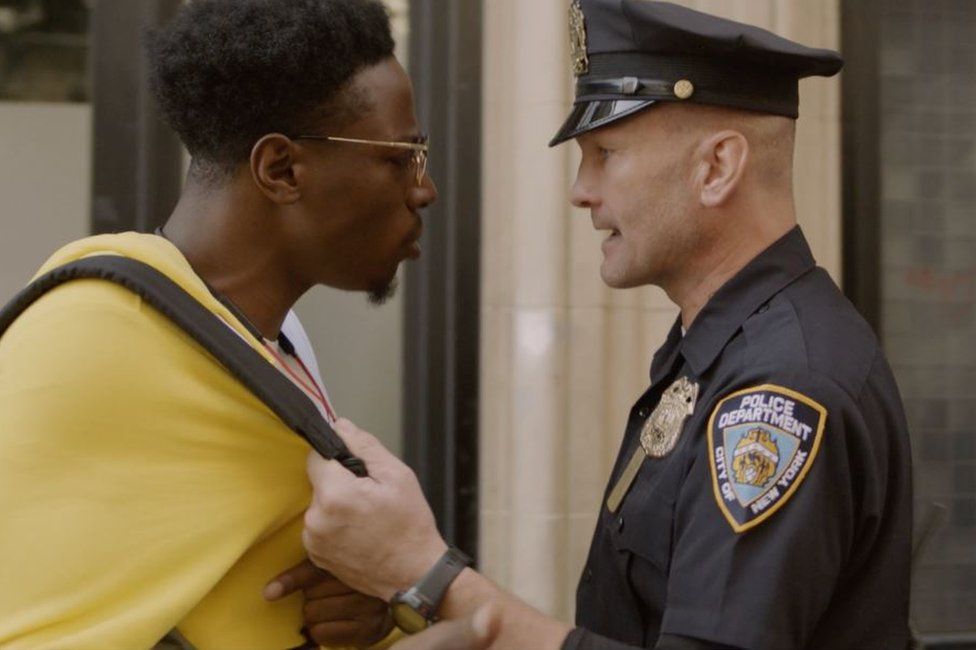 Travon Free was co-writing a romcom screenplay last year when George Floyd died. Free decided the romcom would have to wait – as an African American, he wanted to create a serious screenplay addressing the police killings of black people in the US.

But the resulting short film, Two Distant Strangers, which is nominated at this week’s Oscars, still borrows a lot from one of the big comedy hits of the 1990s.

Travon Free started his career as a writer on Comedy Central’s Daily Show. Last May, he was at work on a screenplay with Martin Desmond Roe, a white British writer and director who has worked in Los Angeles for almost 20 years.

Then, during an arrest in Minneapolis, George Floyd was killed. Derek Chauvin, an officer called to the scene, had knelt on his neck for nine minutes. The incident was caught on video and protests at police brutality against black people spread across the US.

Following Mr Floyd’s death, Free said to Roe that he wanted to switch tracks. “There were all the George Floyd protests in America and marches around the world,” he says. “So at the beginning of our work day I just told Martin I had a new idea for a short film, and after that it just consumed our lives.”

The film is in contention for best live action short at Sunday’s Oscars.

“Two Distant Strangers is about a young black man, Carter, who initially we wrote as a nerdy cartoonist,” Free says. “He’s spent the night with a girl he met. But he’s left his dog at home and in attempting to leave the apartment to get to the dog, he has a run-in with a police officer who ultimately kills him.”

Dying, he wakes up back in the girl’s bed. He realises everything that’s happening he’s seen before, and the audience recognises he’s stuck in a time loop.

The device is familiar from the 1993 film Groundhog Day, starring Bill Murray. Free is not the only writer to have borrowed it.

Roe says neither of them hesitated to use the structure, even if audiences might associate it more with romantic comedy.

“As soon as Travon pitched it to me I thought, this is a great metaphor for what America is going through right now. His screenplay really elevates the idea.

“As we were discussing the screenplay last summer, we were watching America tear itself apart. The idea of doing something that might speak to what was happening was overwhelming to me and to almost everyone who got involved.”

The film lasts 32 minutes and was shot with LA standing in for New York. Free and Roe share the director’s credit. Carter is played by the rapper Joey Bada$$, while Welsh actor Andrew Howard makes a convincing New York cop.

Free says writing the story was a powerful experience. “It was the first time that, whatever I thought a piece of writing would be, I was pulled away from that by the script itself.”

He says the urge to write came of anger, sadness and hopelessness.

“But also I was holding onto a little bit of hope that we could change America.”

He says white people and black people react differently to the film.

“White viewers say to me that they finally see this story differently – they understand in a way they never could when they were trying to engage in the issue.

“We put you right in Carter’s shoes and, no matter what your background is, you have to go on that journey with him. It’s the power of film.

“And for black people it feels like a confirmation of what they’ve already been feeling about these events.”

In reaction to Chauvin’s murder conviction on Tuesday, Free tweeted: “Justice for George has been served.”

He also told the Hollywood Reporter: “The fight to end police violence is not over, and one verdict won’t change the system that perpetuates it, but it is a sign that we have the ability to move in the direction of a society where these things no longer happen.”

Free’s screenplay may have been prompted by a specific death, but George Floyd is not the only person he keeps in mind.

“I was on the phone to Martin and he told me about the death of Daunte Wright in Minneapolis [on 11 April]. It felt like the worst kind of confirmation of why what we’ve done with our film was important and necessary.

“It’s an issue that we still haven’t dealt with. We still refuse to give it the level of importance it deserves.

“Once we do, we’ll finally be at the beginning of the conversation we need to have so there aren’t more Daunte Wrights and Adam Toledos and George Floyds.”