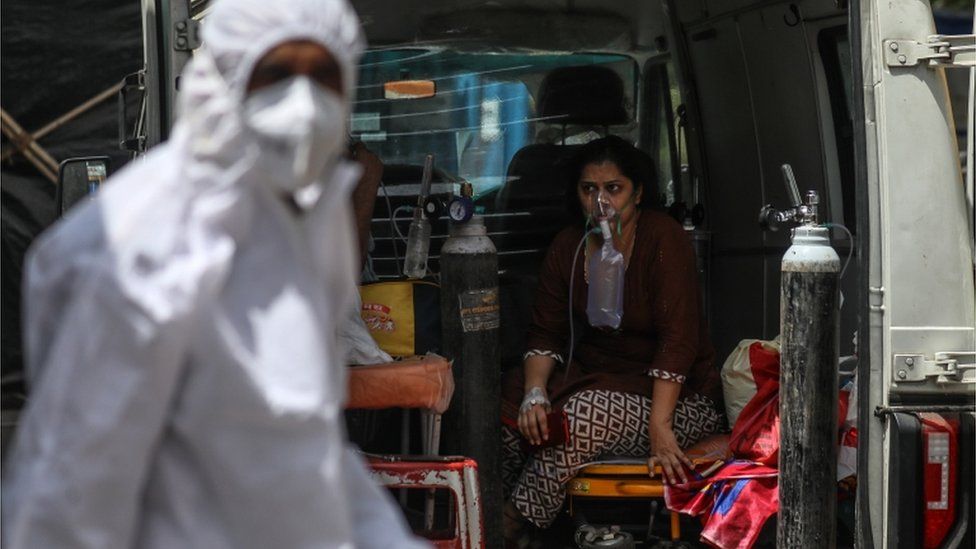 The highest court in India’s capital Delhi, has publicly criticised the central government for its handling of the oxygen crisis in the city.

The country reported 2,023 deaths on Wednesday, its worst daily toll. More than 200 of those were from Delhi, where hospitals faced oxygen shortages.

The court was hearing a petition by the owner of six private hospitals.

It ordered the government to ensure safe passage of oxygen supplies from factories to hospitals across India.

“This is ridiculous. We want to know what the centre is doing with regard to oxygen supply across India,” the judges said while reading out the verdict, adding that it was the responsibility of the government to “beg, borrow…steal” to ensure oxygen supplies.

A number of people across the country have died while waiting for oxygen though it is not possible to know how many. Indian social media has also been filled with appeals for oxygen.

Crowds are gathering outside hospitals in major cities which are filled to capacity. Health services are struggling to cope.

Authorities in the western state of Maharashtra – which is the worst affected state- announced a series of additional restrictions starting from Thursday evening, as it battles a steep surge in cases.

It was already under partial lockdown from 14 April.

Maharashtra is India’s richest state and home to its financial hub, Mumbai. It’s also been a Covid hotspot since the start of the pandemic.

It now accounts for a quarter of India’s more than 15 million Covid cases.

Maharashtra has also reported more deaths from the virus than any other state – 67, 468. India has confirmed more than 180,000 deaths so far. Although deaths have been rising, the fatality rate remains relatively low.

India has seen a rapid rise in case numbers over the past month, driven by lax safety protocols, and a Hindu festival attended by millions and variants of the virus, including a “double mutant” strain. It was detected in 61% of samples tested in Maharashtra, according to the National Institute of Virology.

Huge election rallies – including by Prime Minister Narendra Modi – were also not halted in the state of West Bengal which has been going to polls in phases.

Voters will be out on Thursday as well, for the sixth stage of voting. The government has defended the decision to continue with the polling.

Critics have also pointed to the lagging vaccination drive in the country, which experts say needs to pick up quickly to contain the spread. India has so far administered more than 130 million doses, but the drive has so far been restricted to health workers, frontline staff and those above the age of 45 and anyone with comorbidities.

From 1 May, people above 18 will also be eligible for the vaccine. But a supply crunch, which is already affecting the drive, could slow it down further.