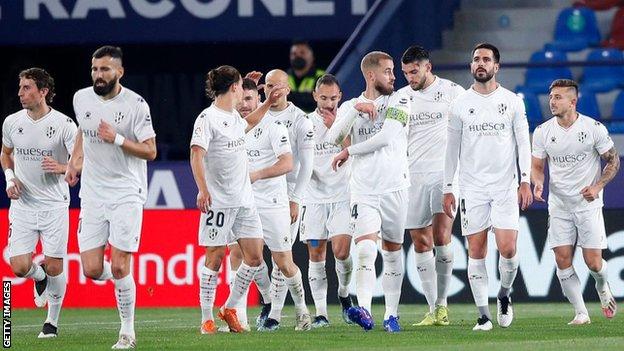 It is the little details that matter at Huesca.

On Thursday, club captain Jorge Pulido will pull on the latest in a series of bespoke armbands decorated with details of their opponents, as the Aragonese side travel to Atletico Madrid.

Huesca are playing in only their second La Liga campaign after winning promotion last season and a result against title-chasing Atletico would boost their chances of avoiding going straight back down, as they did in 2018-19.

Survival in Spain’s top flight is no small task for a club nestled amid the foothills of the Pyrenees and whose 7,638-seat Estadio El Alcoraz was hosting third-tier football six years ago.

“It is true Huesca is a spectacular place,” says Pulido, who has laid down roots in the city since arriving in 2017 and co-owns a restaurant with team-mate Mikel Rico.

“We have the Pyrenees and it is an incredible place. Perhaps we take things for granted, but through football we have opened up a door here so we can now be placed on the map and showcase to the world how privileged we are in this province.”

The unique captain’s armband initiative has also caught the imagination, incorporating a different design for every away game.

At the Nou Camp, for example, Pulido’s armband represented Barcelona’s La Masia academy, Johan Cruyff, the European Cup-winning ‘dream team’ of 1992 and a goat – or G.O.A.T. – for Lionel Messi.

“The armband is like wearing Huesca and displaying Huesca all over Spain,” explains Pulido, who rates the Barcelona design and one featuring Athletic Bilbao’s San Mames stadium among his favourites.

“I have been collecting all the armbands I have been wearing since last year. It is an initiative that I love.

“The team makes one for the opponent and another for the match and I always keep my armband because it’s fascinating. I would like to keep them forever. Each one has their own specific flavour.”

Huesca returned for their second season in La Liga after winning promotion last year and recently climbed out of the relegation zone for the first time, only to drop back in after Wednesday’s results, with Pacheta’s arrival as head coach in January seeing them earn four vital victories, having won just one game before that.

“When you don’t win you have to make changes and in this case we changed the coach. That was a breath of fresh air for everybody,” says Pulido.

“It seemed we were going to be relegated, but we are still alive and kicking. Our dream was getting further and further away from us, but now we are in a much better situation.”

Part of their revival has been down to the form of on-loan Wolves striker Rafa Mir, who has scored 12 times in La Liga this campaign, including six in his past six games.

The 23-year-old, who spent last year on loan at Nottingham Forest, has recently struck up a partnership with another player familiar to Premier League fans, ex-Everton forward Sandro Ramirez.

“I feel in great form and our new coach is allowing us to believe in ourselves,” says Mir. “We have new ideas, a different system. The club’s profited from this and me too, because I have more opportunities to score.

“We have different characteristics and it has been good for the team. We have very clear ideas about what we have to do and what is at stake.”

With seven games to go, and with Huesca one point from safety, Pacheta has instilled a new belief in his side.

“We are all going in the same direction – we are a small team and have to fight for things a lot more than the others,” adds Mir. “You have seen that over the last few weeks.

“We are a really close team and we have a really good atmosphere. From the first-team players right down to the kitchen staff, we are a united club and that is very important for everything we have at stake at the moment.”

One of the players helping to drive that is 35-year-old Japan forward Shinji Okazaki, a Premier League winner with Leicester City in 2015-16.

“He helped us a lot to be promoted to the top division and this year he is participating less, but in any case he is an example for all of us,” says defender Pulido.

“You see the way the guy works and he is incredible, he is always in favour of getting things done and young people can learn that if you want to win something you have to work very hard and that is the only option available to you. “

Huesca now take their survival fight to Atletico, a club with whom Pulido spent more than a decade after joining as a 10-year-old.

“For me, it is a very special match,” he says. “We are in a perfect moment and will try to make things very difficult for them.

“Defensively we are working a lot to reduce the number of goals and we have to work on our mindset. When you are struggling not to be relegated, that can be exhausting. Your mind as a professional football player is a very important thing.

“You think you are dead and have no options but when a coach comes along and makes you see nothing is impossible, you believe in what he is proposing.”