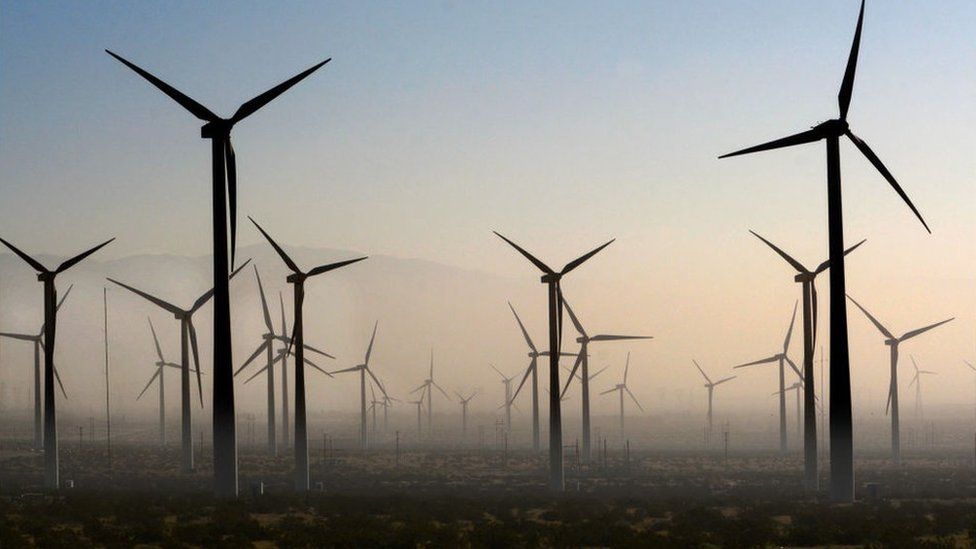 The US has pledged to cut carbon emissions by 50-52% below 2005 levels by the end of this decade.

This new target, which will be unveiled at a virtual summit of 40 global leaders, essentially doubles their previous promise.

The Americans hope that their ambitious new plan will encourage China, India and others to go further before the crucial COP26 meeting, in Glasgow in November.

But there will be some scepticism about the ability of the US to deliver on its new target, given the divided nature of American politics.

“All of us, and particularly those of us who represent the world’s largest economies, we have to step up, President Biden said at the summit’s opening address.

“Those that do take action and make bold investments in their people, and the clean energy future, will win the good jobs of tomorrow, and make their economies more resilient, more competitive.”

Vice-President Kamala Harris added: “As a global community, it is imperative that we act quickly and together to confront this crisis.”

“This will require innovation and collaboration around the world.”

The UK is among the countries that have been keen to show their ambition ahead of the meeting. Earlier in the week, the prime minister announced a “world-leading” target for the UK to cut emissions by 78% on 1990 levels by 2035.

The country is playing a critical role this year as president of COP26, and is tasked with achieving agreement in Glasgow when world leaders meet there in November.

If you cannot see the chart, please refresh your browser

Biden’s ambition will be challenged

Climate has been the central focus of the Biden administration’s first few months in office.

As well as rejoining the Paris climate pact and organising Thursday’s summit, the Biden team have been working on a strong pledge to convince the world that they mean business.

Many commentators had pushed the US to go for a 50% cut in emissions as a clear signal of intent.

The fact that President Biden is prepared to go beyond this level will be a welcome surprise to many scientists and campaigners.

“By announcing a bold target of cutting emissions 50-52% below 2005 by the end of the decade, President Biden has met the moment and the urgency that the climate crisis demands,” said Nathaniel Keohane from the US Environmental Defense Fund.

“This target aligns with what the science says is necessary to put the world on the path to a safer climate, and vaults the US into the top tier of world leaders on climate ambition.”

The new pledge will mean huge changes to the American way of life. Coal will have to disappear from the electricity mix, while gas guzzling cars and trucks will have to go electric.

But announcing an ambitious target is one thing – turning it into reality is another.

While the Democrats have a majority in the House of Representatives, the Senate is essentially deadlocked, making the passage of new climate legislation rather tricky.

“It seems to me that President Biden is in a bit of a bind, and he has to deal with the Congress that he has,” said Samantha Gross from the Brookings Institution.

“But I believe that Congress, particularly the Republicans haven’t really kept up with increasing concern among the American public about climate.”

US and China keen to co-operate

Among the 40 leaders attending the summit will be China’s President Xi Jinping.

Despite serious tensions between the US and China on a host of issues, both sides seem keen to keep climate change separate from these disputes.

Speaking ahead of the meeting, a senior administration official spoke warmly about the co-operative approach.

“We certainly hope that President Xi will come to the meeting, and further elaborate on some of the additional efforts that China would choose to make. But I think we’ve got a very strong basis in the joint statement that the two countries made about the directions they seem to be moving.”

But for other countries who have been slow to embrace action on climate change, the Biden team were less effusive.

Both Brazil and Australia’s sceptical approach to the issue had found favour in the Trump White House. That’s no longer the case.

“At the moment, I think that our colleagues in Australia recognise that there’s going to have to be a shift,” one official said.

“It’s insufficient to follow the existing trajectory, and hope that they will be on a course to deep decarbonisation, and getting to net zero emissions by mid-century.”

Speaking about Brazil, the same official said: “The expectation for all countries is that the ambition has to be increased immediately.”

UK Prime Minister Boris Johnson is expected to tell the virtual White House meeting: “The UK has shown that it’s possible to slash emissions while growing the economy, which makes question of reaching net zero not so much technical as political.

“If we actually want to stop climate change, then this must be the year in which we get serious about doing so.

“Because the 2020s will be remembered either as the decade in which world leaders united to turn the tide, or as a failure.”

At the summit, President Biden added: “This is a decisive decade. The steps our countries take between now and Glasgow will set our world up for success.”

In addition to the US pledge, there are also expected to be new steps announced by a number of countries.

“The three that I think are most likely beside the US to step up at this summit are Canada, Japan and South Korea,” said Helen Mountford from the World Resources Institute (WRI).

“China… would be fantastic, but I think [we] quite likely might wait longer, I wouldn’t expect it at this time.”

She added: “India is a real question mark, but whether they’re going to announce either a net zero target or enhanced plan, I would say there’s less of a chance of that.”

For those who were involved in the negotiations that led to the Paris agreement in 2015, the key thing this week is not to derail the discussions at the first hurdle.

This is the first big climate meeting of a critical year that will culminate in a gathering of around 200 world leaders in Glasgow in November at COP26.

“I think that for the US leaders summit to be a success, we need to have the 40 leaders present and expressing their willingness to reach strong agreement by Glasgow,” said Remy Rioux, who was a negotiator for France during the Paris talks.