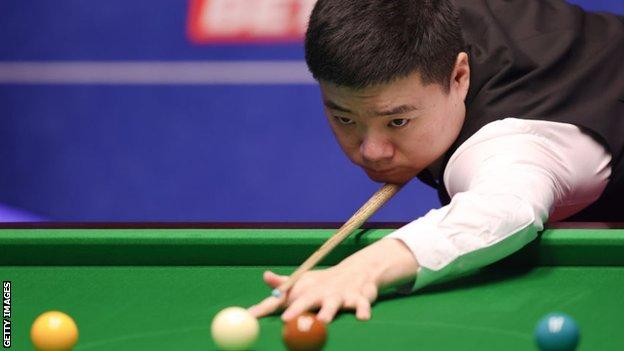 A gripping first-round tie was halted in the afternoon at 9-9 as tournament rules mean a frame cannot start within 45 minutes of the next session.

When play resumed after Mark Allen defeated Lyu Haotian, Ding missed a red and Bingham made a 70 to win through.

“I am over the moon and now well into the tournament,” said Bingham.

“I understand the decision to take us off but it was a nightmare. It’s not something you want to go through.

“But it’s great to be here and playing in front of fans and great to get the first match out of the way.”

China’s Ding, a 14-time ranking event winner, held a one-frame overnight lead at 5-4, but breaks of 60, 92 and 104 helped Bingham take the lead at 8-7 before the 2016 runner-up regained his composure to draw level again.

The Essex man once again edged ahead but was made to wait for his victory by both the schedule and his opponent.

Allen, whose best World Championship performance saw him reach the semi-finals in 2009, began with a stunning break of 139 – matching Kyren Wilson’s high score at this year’s event.

The 35-year-old scored two more centuries as he built a 7-2 first-session lead.

And his strong attacking game continued to prove too much for his outclassed opponent when play resumed in the evening as he rounded off an emphatic showing without dropping another frame.

A nerveless break of 82 forced the first decider of this year’s event and a score of 60 helped Lisowski progress.

“I stayed strong mentally and managed to turn it around,” said Lisowski, 29.

“It doesn’t get any closer but I managed to win so many close frames. I cleared up at 8-6 and to have won from there is great.

“I’ve never won a tournament so why not make the World Championship the first one? It would be amazing.”

Elsewhere, world number two and 2019 champion Judd Trump was on top from the off as he built a 7-2 lead over qualifier Liam Highfield.

Bristolian Trump, who has won five ranking events this season, kicked things off with a rapid century.

And a dominant performance followed, with four further breaks of more than 50 taking him within three frames of a second-round meeting with Dave Gilbert.