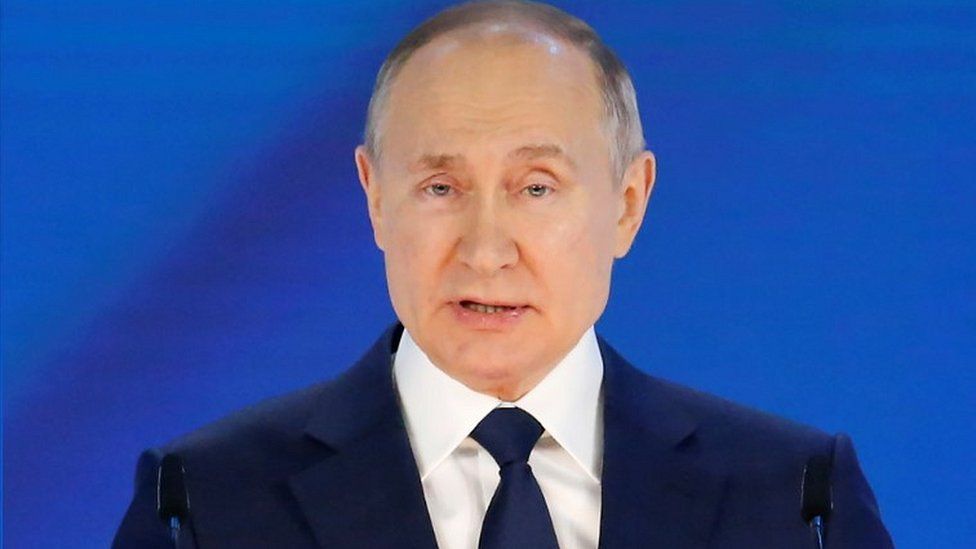 Russian President Vladimir Putin has warned the West not to cross a “red line” with Russia and condemned what he called a coup plot against Belarus.

The warning came in his annual state of the nation address, amid heightened tension with the West over Ukraine and jailed Putin critic Alexei Navalny.

“The use of unjust sanctions is growing into something more dangerous: a coup attempt in Belarus,” he said.

On 17 April the Belarusian authorities announced that they had foiled a US-backed plot to assassinate President Lukashenko. They said Russia’s FSB security service had helped them defeat the attempted coup.

The claim was dismissed by the exiled Belarusian opposition leader Svetlana Tikhanovskaya as a “provocation”.

There have been massive demonstrations in support of her since Mr Lukashenko claimed re-election last year, in a vote widely condemned as rigged. Thousands of protesters were beaten up by police and detained.

President Putin said Russia wanted good relations with all countries, but there were constant attempts by Western powers to “pick on” Russia.

“We don’t want to burn bridges, but if somebody interprets our good intentions as weakness our reaction will be asymmetrical, rapid and harsh.”

He said “we’ll decide for ourselves in each case where the red line is”.

Tensions have been building over Ukraine, as reports say Russia has moved more than 100,000 troops close to disputed areas.

A large part of that force is in Crimea, the peninsula which Russia annexed from Ukraine in 2014. A senior Ukrainian officer, Gen Serhiy Nayev, estimated the total force to be 103,200 last week.

Russia backs the separatists holding a swathe of eastern Ukraine, and its manoeuvres have fuelled fears of a new Russian military intervention.

Mr Putin’s speech comes as anti-corruption campaigner Alexei Navalny, an arch-critic of the president, is being treated at a prison hospital in Vladimir, about 180km (112 miles) east of Moscow. He is on hunger strike and his allies say his life is in danger.

Mr Putin began speaking at Moscow’s Manezh exhibition hall at 12:00 (09:00 GMT), addressing both chambers of the Russian parliament. RIA news agency says all those attending had to undergo three tests for Covid-19 in recent days.

The first half of his speech focused on Russia’s battle with Covid-19 – he praised the social solidarity of millions of people.

Mr Putin, who coughed several times during his speech, said “vaccination is vital… there is no other way”, and he urged all Russians to get vaccinated.

“In the autumn, we want to have achieved collective immunity,” he said.

He said Russia was in a demographic emergency, and Covid was making matters worse. “We must maintain tight control to stop the virus spreading.”

The trend must be reversed, to achieve a median life expectancy of 78 years in Russia by 2030, he said.

During the pandemic Mr Putin has largely remained at a residence just outside Moscow, so this is a rare appearance in public.

Russian police have launched raids on supporters of Navalny to disrupt their plans for nationwide protests later on Wednesday.

Two key Navalny aides who are already under house arrest – lawyer Lyubov Sobol and his spokeswoman Kira Yarmysh – were detained by police in Moscow. Dozens of other Navalny supporters were detained across Russia.

The authorities say any pro-Navalny mass protests will be illegal. Police are expected to block off streets around Manezh Square in central Moscow, where his supporters plan to rally at 19:00.

Last week the US government accused the Kremlin of “malign activity” and expelled 10 Russian diplomats. Russia responded tit-for-tat. Similar hostile exchanges of diplomats took place between Russia and both the Czech Republic and Poland.