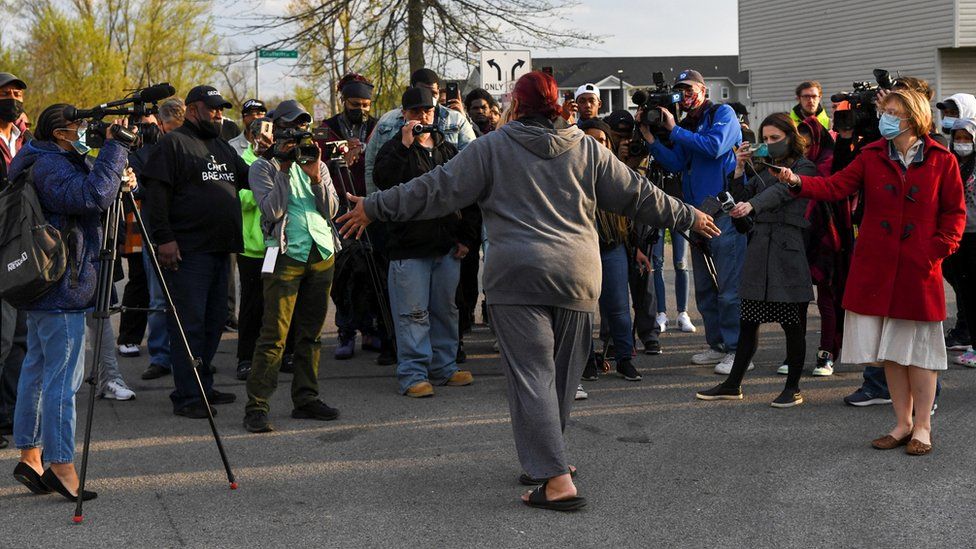 A police officer in the US state of Ohio has shot dead a 16-year-old black girl while responding to an emergency call over an attempted stabbing.

The teenager involved in the incident, in the state capital Columbus, has been identified as Ma’Khia Bryant.

Columbus police have produced bodycam footage which appears to show the girl attacking others with a knife before being shot.

An inquiry is under way, with officials urging local residents to remain calm.

The officer involved, who has not yet been named, has been placed on paid administrative leave, US media report.

Police were called to an address in a south-eastern area of Columbus at about 16:45 local time (20:45 GMT) on Tuesday, the Columbus Dispatch newspaper reported.

Bodycam footage provided by the police shows an altercation with a group of individuals outside a house before one of them – said to be Ma’Khia Bryant – appears to lunge at another member of the group with a knife in hand.

A police officer then approaches the group in the driveway and shouts “get down” before firing several shots, fatally injuring the girl.

Officials have said the officer opened fire in order to save the life of one of the girls, although a woman identified in local media as Ms Bryant’s aunt said her niece was simply defending herself after being attacked.

Speaking to local broadcaster WBNS-TV, Ma’Khia Bryant’s mother, Paula Bryant, said she was “hurt” by what had happened and that her daughter was a “loving girl”.

“This shouldn’t have happened,” she said, adding: “I want answers.”

Paula Bryant said her daughter, who had been staying at a foster home, was “looking forward to coming home”.

At a news conference, the interim chief of Columbus Police, Mike Woods, said an inquiry was being conducted by the Ohio Bureau of Criminal Investigation.

“At the conclusion of that investigation, the divisional police will conduct an administrative review of the actions of this officer and all officers at scene,” he said. “This is a tragic incident for all involved, but especially for the family of the female.”

Columbus Mayor Andrew Ginther described it as a “horrible, heart-breaking ” and a “tragic day in the city”.

“We know, based on this footage, the officer took action to protect another young girl in our community – but a family is grieving tonight.”

The widely watched footage sparked worldwide protests against racism and excessive use of force by police.

Protesters later gathered in Columbus near the home where the girl’s shooting took place.