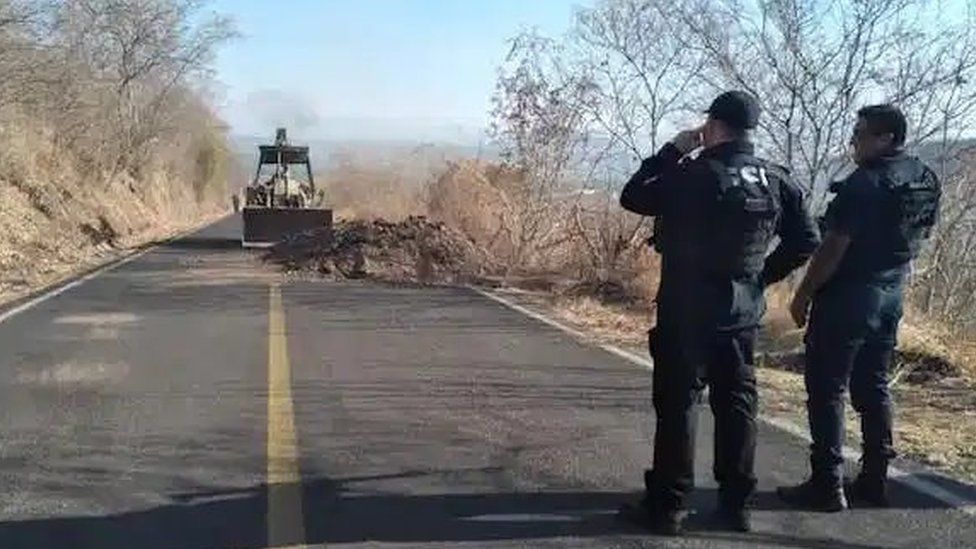 Officials think the powerful Jalisco New Generation Cartel (CJNG) is behind Tuesday’s attack in the western state of Michoacán.

In August, two rigged drones were found in the car of suspected CJNG members.

The drones are thought to be the latest weapons in a deadly war between the drugs cartel and the security forces and vigilantes opposed to them.

New weapon in a deadly fight

Not much detail has been released about Tuesday’s attack but local media said two drones had been used.

It is believed they were rigged in a similar way to the two drones that were found in the car boot of suspected cartel members.

The drones seized last year had containers taped to them which had been filled with plastic explosives and ball bearings. Experts said they had been set up to be detonated remotely and could have inflicted deadly damage.

The officers injured on Tuesday had been deployed to clear roads leading to the city of Aguililla, in Michoacán, which had been blocked by the cartel to impede the access of the security forces.

Over the past weeks, hundreds of residents have been fleeing the city in fear as the CJNG and a rival group calling itself United Cartels (Cárteles Unidos), fight for control of the city.

Earlier this month, eight mutilated bodies were found in the area after a particularly deadly fight between the two groups.

“El Mencho” is one of Mexico’s most wanted men and the US Drug Enforcement Administration is offering a $10m (£7.2m) reward for information leading to his capture.

His cartel is one of the most powerful in the country and has been behind some of the deadliest attacks on Mexican security forces, such as a 2015 ambush in Jalisco which left 15 officers dead.

It has spread from his original power base in the state of Jalisco to have an almost nationwide presence.

The cartel is believed to have further stepped up its attacks on the security forces in retaliation for the extradition to the United States of El Mencho’s son, Rubén Oseguera González, known as “Menchito” (Little Mencho), on drug trafficking charges.