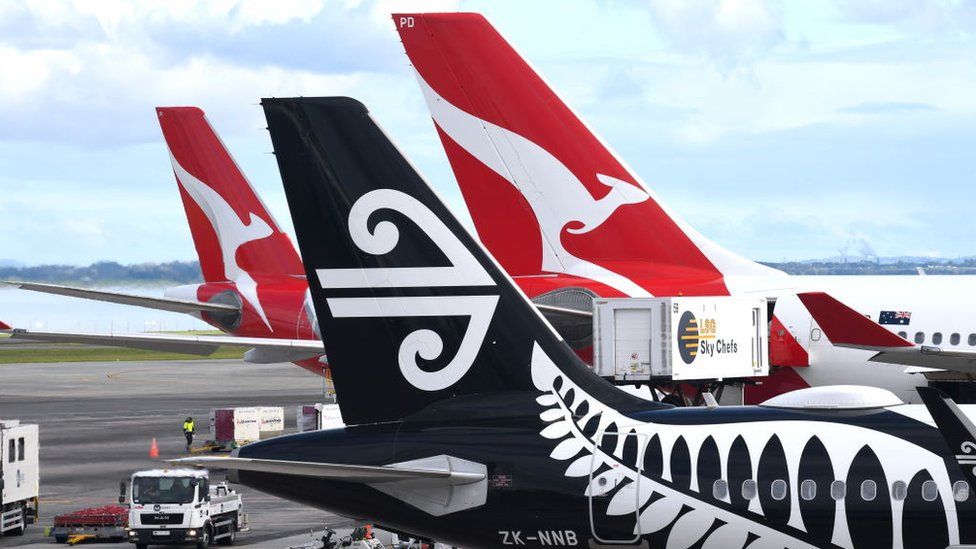 The reopening of quarantine-free travel between Australia and New Zealand this week was a joyful occasion for the many families and friends who were finally reunited.

It was also a huge moment for the airlines, particularly Qantas and Air New Zealand.

Most airlines have muddled through a bruising pandemic year with a combination of private capital injections, government support and strong demand for freight services.

The industry’s more optimistic voices hope that the bubble could foreshadow a much better year ahead for the Asia-Pacific region’s battered airline sector.

630 employees from Qantas and its budget carrier Jetstar have returned to work to help operate the roughly 200 flights each week planned between the two countries.

Monday’s flights were full, and the two airlines expect to consistently fly at around 80% of capacity with those numbers increasing as the New Zealand ski season approaches.

Already, Qantas had started to bounce back domestically, and predicts that both of its carriers will exceed pre-Covid volumes within Australia next year.

It’s also great news for Air New Zealand, which rehired 300 staff for the trans-Tasman flights, which make up around a third of its business.

“Pre-COVID, Australia was New Zealand’s largest tourism market, with Air New Zealand bringing in roughly 400,000 Australians per year, so it’s an incredibly important market for us and we’re just thrilled to have the bubble up and running,” said Air New Zealand’s Chief Executive Greg Foran in an email.

In fact, the bubble has been encouraging enough for Air New Zealand to hit pause on a capital raise to reassess how much it might need.

The bubble is a reason for hope for the aviation industry for the wider region, according Subhas Menon, the Director General of the Association of Asia Pacific Airlines (AAPA).

“It is the first bilateral travel bubble without any quarantine requirements. And of course it has been a long time coming but it is a model that can be emulated across the globe,” he said.

“There’s clearly a lot of countries in the region, particularly the Asia-Pacific region, that have high control over Covid. Not to the extent of Australia and New Zealand, but they give us opportunities, markets like Singapore, markets like Japan, markets like Taiwan.

But reopening travel – even in a bubble – is clearly not easy.

Within a day of the travel bubble opening, a cleaner at Auckland airport who had been fully vaccinated tested positive for Covid-19.

Quickly, the New Zealand authorities pointed out that the case was not directly related to the bubble, adding that they expected a few cases, and it wouldn’t end the new travel arrangements.

“When we opened, on both sides, we of course knew we would continue to have cases connected to our border,” New Zealand Prime Minister Jacinda Ardern said.

Still, if that case had been more difficult to trace or there were more unconnected cases, flights could have easily been suspended.

One airline, Virgin Australia, is so worried about the possibility of disruption that it plans to wait until October to join in the bubble.

It’s not an idle concern – other bubbles have been deflated even before they began.

Last year, a proposed bubble between Singapore and Hong Kong was postponed just a few day before it opened due to a sudden spike in Hong Kong.

Even within Australia there have been more than 120 changes to state border restrictions since the beginning of the pandemic.

Mr Menon said almost every country has taken a different approach to containing Covid, and there needs to be more consistency.

The AAPA has been urging governments to try to harmonise their travel requirements to facilitate airline travel, preferably using digital solutions.

A number of airlines, including Air New Zealand, have signed up to trial a new vaccine passport developed by the International Air Transport Association.

Mr Menon says the digital passport, and other solutions like it, could help to build trust so that governments are confident enough to reopen their borders.

If Qantas hopes more travel bubbles might help to reopen international travel, others aren’t as optimistic.

Australia and New Zealand were both quite successful in containing the virus, but it required both both countries to close off their borders for more than a year, with international arrivals required to go through a two-week hotel quarantine at their own expense.

Australia has recorded just over 29,500 virus cases and 910 deaths since the pandemic began, while New Zealand has had just over 2,200 confirmed cases and 26 deaths.

“I’m not sure how many other countries are going to be able to do exactly what New Zealand and Australia have done with the bubble. That’s because there aren’t all that many other countries that have adopted an elimination strategy for COVID-19 – most have gone for containment,” Mr Foran said.