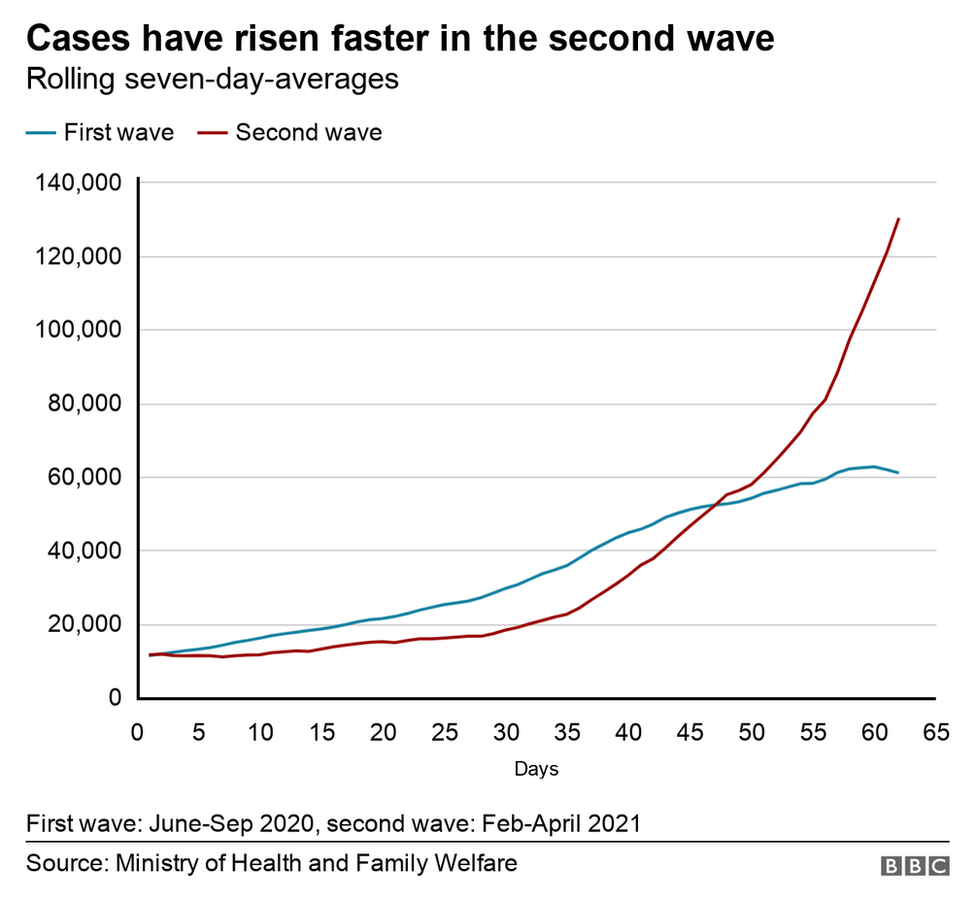 Rajeshwari Devi, 58, died on Sunday after waiting for two days to get uninterrupted oxygen, an ambulance and a bed in a Covid-19 hospital.

She kept waiting and gasping but it was too late by the time help arrived. She was taken to a hospital emergency room on 16 April after her oxygen saturation level dropped. Her CT scan showed that she had developed chronic pneumonia.

But without her Covid report the hospital refused to admit her. She spent around 36 hours in the emergency room on oxygen support in the northern Indian district of Robertsganj. The staff there told her family they were running out of oxygen and she needed to be moved to a bigger hospital but there was no ambulance or any promise of a bed.

The desperate family took her in their car to a hospital where a bed had become available after the intervention of a politician. She had no oxygen support in the car – she died minutes before she could be admitted to hospital.

Ashish Agrahari, her son, says his mother “would have had a chance at survival if treatment was given in time”.

Heartbreaking stories such as this are coming in from across India as a second Covid wave wreaks havoc. Data suggests that this wave is proving to be more infectious and deadlier in some states, although India’s death rate from the virus is still relatively low.

But the county’s healthcare system is crumbling amid the surge in cases – doctors say it’s hard for them to “see the light at the end of the tunnel this time”.

The rise in case numbers has been exponential in the second wave.

Experts say this rapid increase shows that the second wave is spreading much faster across the country. Dr A Fathahudeen, who is part of Kerala state’s Covid taskforce, said the rise was not entirely unexpected given that India let its guard down when daily infections in January fell to fewer than 20,000 from a peak of over 90,000 in September.

Big religious gatherings, the reopening of most public places and crowded election rallies are being blamed for the uptick. Dr Fathahudeen said there were warning signs in February but “we did not get our act together”.

“I said in February that Covid had not gone anywhere and a tsunami would hit us if urgent actions were not taken. Sadly, a tsunami has indeed hit us now,” he added.

“A false sense of normalcy crept in and everybody, including people and officials, did not take measures to stop the second wave.”

Many Indian cities are reporting a chronic shortage of hospital beds. It’s also evident in the desperate cries for help on social media platforms. Disturbing reports of people dying without getting timely treatment are coming from all over the country.

Several state governments say they are creating new facilities but experts say it’s going to be hard to keep up with the pace of the rising number of infections.

India has been consistently reporting more than 150,000 cases for days now. It reported 273,810 cases on Monday – the biggest daily spike since the pandemic began.

Badly-affected cities like Delhi, Mumbai and Ahmedabad have almost run out of hospital beds.

The situation is not very different in other cities, such as Lucknow, Bhopal, Kolkata, Allahabad and Surat. Public health expert Anant Bhan says officials did not use the lean period to boost facilities.

“We didn’t learn any lesson from the first wave. We had reports of some cities running out of beds even in the first wave and that should have been a good enough reason to be prepared for the second wave,” he said.

He adds that there appears to be a lack of co-ordination between states and the federal government over the supply of oxygen and essential drugs. “We need a consolidated response and resources should be shared between states.”

The situation is much more dire when it comes to ICU beds. Several cities have just a few dozen ICU beds left and they are now frantically trying to build extra capacity in hotels and stadiums.

But getting ICU beds up and running quickly is not easy. Dr Fathahudeen says adding beds alone is not enough. “We need to ensure that most of these beds have oxygen facility. We need more doctors and nurses to manage extra ICU beds,” he adds.

He says it’s going to be a “daunting task” for the government to get such facilities up and running and ensure good quality of care in a short span of time.

The number of daily deaths has risen sharply in the second wave. India reported 1,761 deaths on Monday, taking the toll to over 180,000 since the pandemic began.

Crematoriums have been running day and night in several cities, and people have to wait for hours to get the deceased cremated or buried.

Experts say this shows that the actual number of deaths could be much higher.

Sanjeev Gupta, a photojournalist based in the central Indian city of Bhopal, reached one of the city’s crematoriums for what he thought was a usual assignment last week.

Bhopal had reported only four Covid-related deaths on that day. But Mr Gupta was surprised to see dozens of funeral pyres burning. Additionally, several bodies were lined up to be cremated in the electric furnace.

Mr Gupta says he was moved when a young man asked him to photograph the smoke coming out from the chimney of the electric crematorium.

“He said the smoke represented his mother. It’s the most heartbreaking thing I have ever heard.”

Another photojournalist in Lucknow, which is the capital of Uttar Pradesh state, told the BBC that he counted nearly 100 funeral pyres burning at one of the city’s crematoriums in the city on 14 April. The official death data for the whole state on that day was 85.

“The sky had turned orange near the crematorium. I still get chills thinking about it. We are definitely not getting the right death data from the government,” he said.

Another photojournalist the BBC spoke to in Varanasi city in Uttar Pradesh state also talked about similar discrepancies in how deaths were being reported.

Experts say there are several reasons for this. One of them is that many people are dying at home because they are not getting hospital beds or they are not being able to get tested for Covid. So, they don’t find a place as a Covid patient in the database managed by different states.

Mr Bhan says testing facilities are still poor in smaller towns and even in some cities and “it’s possible we are missing many Covid-related deaths in these areas”.

He adds that there seems to be an issue with recording Covid deaths in some states. There have been reports about administrative oversight as well but officials deny the allegation.

“We need more transparency in numbers as it helps in managing the situation and also clearly tells you how severe the situation is,” Mr Bhan adds.

India on 25 March announced that a new “double mutant” variant of the coronavirus had been detected from samples collected from different states.

Virologist Shahid Jameel explained that a “double mutation in key areas of the virus’s spike protein may make the virus more infectious and allow it to escape the immune system”.

He says the change in the virus is the only “logical explanation” behind the surge. Health officials in the UK are now investigating whether a double mutant spreads more easily and evades vaccines.

Dr Jameel adds that India started looking at mutations “fairly late”. “By December, India had done genome sequencing of only 5,000 samples. It wasn’t a concentrated effort.”

In January, India put together a group of labs to speed up sequencing and these labs started functioning in February. “But unfortunately, the second wave started and the vision of sequencing roughly 5% of the total samples did not come through.”

Sequencing becomes important in a pandemic as it allows scientists to monitor changes in the virus. “If you can catch a more infectious variant early on in a region, you can quickly put in public health measures to stop it from spreading wider in the community,” he explains.

But it’s “never too late” to take measures. “We need to strengthen safety protocols and rapidly vaccinate people, and also keep an eye on mutations. If we do all this, we could reduce numbers significantly.”