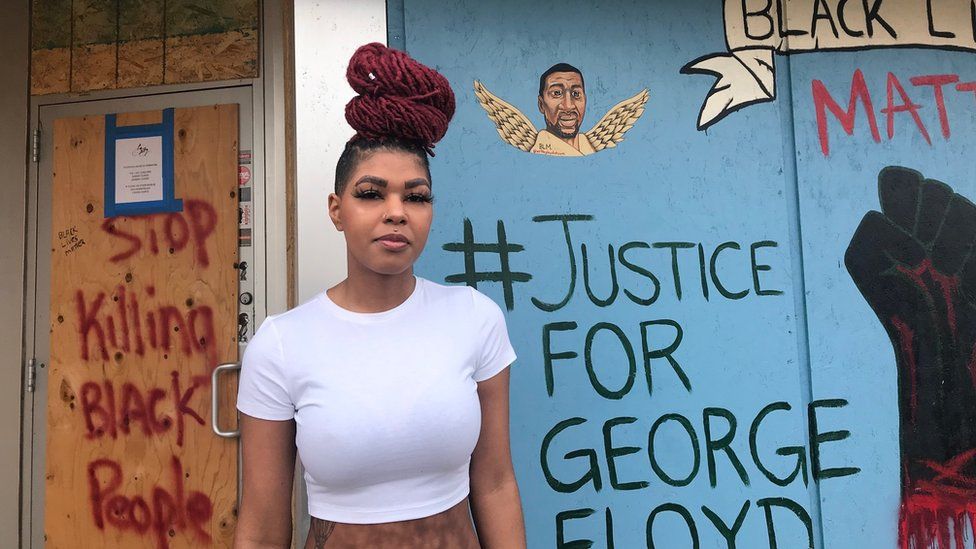 People here waited anxiously for weeks and months, first, as the trial unfolded, and then during the final, nerve-wracking hours, while the jury deliberated. The stakes of the trial were extraordinarily high, and people are relieved, and also trying to process the tumultuous events.

It is a landmark case for police violence against black people, and the verdict marks a significant victory for the activists who have pushed for policing reform: Derek Chauvin was convicted of second-degree murder, third-degree murder and manslaughter in the death of George Floyd.

The jury’s decision means police will now be under increased scrutiny, say legal experts, and are more likely to be prosecuted, and convicted, for wrongdoing. The verdict could usher in a kind of policing, say analysts, with more accountability for officers, as well as new policies for the use of force. And for many, the trial was a sign that the system works.

“It shows that police officers are not above the law,” says Jack Rice, a lawyer in the twin cities, Minneapolis and St Paul. “It will impact future cases that come before the court. What is even more important, however, is that it will impact the behaviour of officers when they are performing on the street. It’s beyond the criminal case – it’s about what the officers do on a daily basis.”

News of the monumental verdict travelled fast. Activist Rosa Gomez, 19, was in her college dorm, and Erika Atson, 20, also an activist, was at home, when it was announced.

The reaction of Rich Stanek, a former sheriff of Hennepin County, the place where the trial was convened, and his colleagues was different.

He was at a conference of law enforcement officials in Idaho, and was not surprised by the verdict. Among he and his friends, though, there was no celebrating: “People were sombre.”

Activists were elated, others reserved. But for all, it was the end of a journey, the conclusion of a trial that had riveted them, and people around the world, and held them in its grip.

Floyd’s death outside of a store, Cup Foods, in May 2020 had set off massive protests and looting. Then, the sensational trial convened, and became the most closely watched one in decades.

Of the dozens of people whom I spoke with here in town, during the weeks the trial unfolded, nearly all agreed that their city had been transformed by the experience. They differed greatly, though, in their views of what the change meant, and whether it was good or bad.

The police chief of Minneapolis and other officers testified against Chauvin. Yet many people who have worked in law enforcement sympathised with him. Ordinary people cannot understand what it is like to make an arrest, they told me, when things can spin out of control.

Others saw Chauvin, and the issues surrounding policing, in a different light. They told me that officers here are rarely held accountable. When these activists and their friends heard the verdict, they were stunned.

“He’s going to jail,” called out one woman in a black sweatshirt, in a sing-song voice, as she jumped up and down outside the building where the verdict was read.

It was a moment of jubilation, as people slammed on horns, jumped on roofs of their cars, and waved hats in the air, a “celebratory protest”, says one.

The activists were happy about the verdict, but also demanded justice in other cases. “You know, we don’t stop here. We have to do the same for all the cops who are murdering people,” says activist Erika Atson. “This is a good win, but we’re not done winning.”

She and other protesters felt vindicated. Ordinary people were just relieved the trial was over. Yet they all wondered what would happen next.

The city was like a village in a snow globe that had been shaken, with snow swirling, and then, finally, it looks peaceful. On Tuesday, the snow settled, for the moment.

Rich Stanek walked the streets of Minneapolis as an officer, and as county sheriff. Yet after Floyd’s death, and the protests that followed, Stanek did not recognise his city. He recalls driving down Lake Street, and seeing rubble. Hundreds of buildings around town had been wrecked, $350m (£250m) in losses, according to officials.

Protesters such as Erika Atson and Rosa Gomez also felt disoriented. The place they, too, had known their whole lives was suddenly a battle zone, with activists and police facing off.

I first saw Gomez, with a 35mm camera slung around her neck, outside the building where the trial was taking place. Later, she told me about her hometown, Minneapolis, a city known for its liberalism, lakes and northern climate. A place with chilly weather and personal warmth, a study in contrasts.

People associate racism with southern US cities, says Gomez, and their history of slavery, not northern cities such as Minneapolis. The trial laid bare the bigotry here, she says, some of which she has experienced.

Her father, a custodian, immigrated from Honduras, and she describes herself as a person of colour, as well as queer and non-binary.

She followed the trial and listened sceptically as defence lawyer Eric Nelson described Chauvin’s actions, arguing they were justified.

On that day of the trial, Jerry Obieglo, who works in veterans’ services, was also watching, picking up bits at the office, and catching up at home. As it happened, he had been Chauvin’s boss back in the 1990s in the military.

“A quiet guy,” he remembers. Obieglo was shocked to recognise him in the video, pinning Floyd to the ground.

Obieglo followed the trial on YouTube, and tried to avoid cable news, saying they were biased. Fox focused on the defence, while CNN gave air time to the prosecutors. Obieglo says Fox’s coverage of the trial was better than the liberal-leaning outlets, explaining: “Fox wasn’t blowing Floyd up to be an angel.”

Obieglo says Chauvin used poor judgement. Still, Obieglo thinks the jurors went too far, finding him guilty on all three counts, rather than just on manslaughter. He blames the sensationalised coverage, and the protests, for the decision. He believes the jurors felt pressured, and acted out of fear: “I guess they want to make sure their houses don’t get burned down tonight.”

‘We have to destroy’

The building where the trial convened was turned into a fortress, with military Humvees outside, another sign of the way the trial changed the city. By Monday, the day the jury began their deliberations, 3,000 National Guard troops were on duty. “It looks like a forward operating base in a foreign country,” says Rich Stanek, the former sheriff.

But for all the physical changes in the city, some aspects remained, distressingly, unchanged. During the trial a black man, Daunte Wright, was killed in a suburb. A white officer, Kimberly Potter, had apparently mistaken her Taser for a handgun, and was charged with manslaughter. It was a reminder of the violence. More than 50 black people have died in the state during interactions with police officers since 2000, according to the Star Tribune.

In the midst of the trial, Erika Atson was sitting at a cafe, a place where she used to go with her Sunday school friends, and watched a live stream of testimony.

Atson was raised by her mother, a hotel maid, in south Minneapolis, and hung out at Cup Foods, snacking on Takis, a spicy chip. After Floyd’s death outside the store, she went to protests and watched flames pour from buildings. The air, she says, smelled of burning tires: “I remember seeing ATMs being pushed back and forth, and people hitting them with sticks, like they were hitting a piñata.” She was frightened. But, she says, she felt the violence was justified.

“I’ve always known that violence is not the answer, but how much longer do we have to be peaceful?” she says.

“Here I am, now, thinking we have to use violence. We have to destroy government buildings. I felt bad when I was there, but I was also like – it has to be done.”

During the trial, Maren Beard, 35, watched from her farm hundreds of miles away in the US state of Iowa. She was disturbed by the notorious video, and frustrated by her lack of awareness about police brutality.

She says: “These things happen all the time. I hadn’t thought about it as much as I should, so I think it was kind of a wake-up call.”

A wake-up call for some. For others, a chance to upend the city.

At one, demonstrators gave out sparklers, and she began choking on all the smoke.

Still, she loved seeing the popping lights: “It was just kind of fun.”

That day, she recalls walking past a billboard that said: “We’re not trying to start a race war. We’re trying to end one.”

For her and many other protesters, the verdict on Tuesday was a step in that direction.