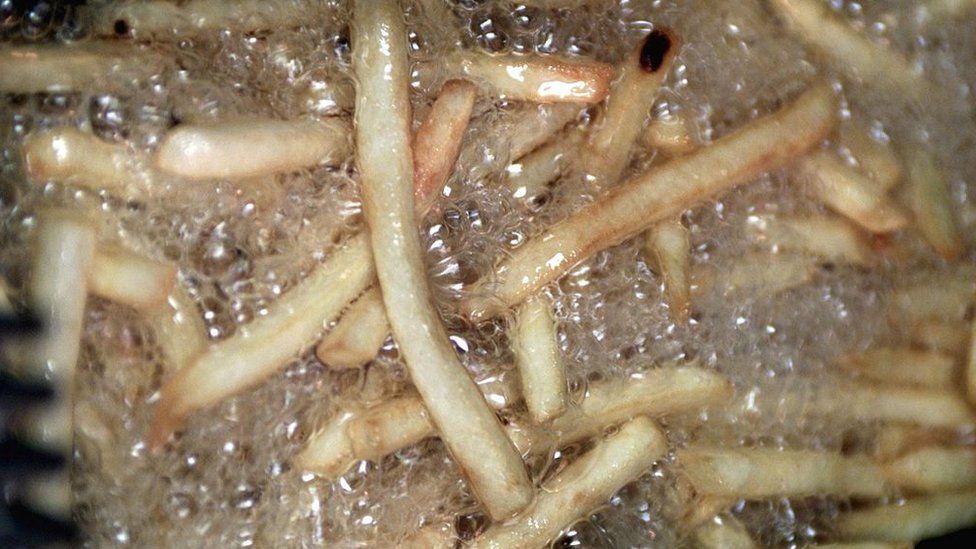 New research questions the environmental impact of rising imports of used cooking oil (UCO) into the UK and Europe.

Chip fat and other oils are considered waste, so when they are used to make biodiesel it saves carbon emissions by displacing fossil oil.

But such is the demand across Europe that imports now account for more than half of the UCO that’s made into fuel.

According to the study, there’s no way to prove these imports are sustainable.

With no testing of what’s coming in, experts believe it is also ripe for fraud.

Reducing emissions from transport is proving to be one of the toughest challenges for governments all over the world.

They’ve encouraged the use of biofuels as important means of curbing carbon from cars and lorries.

Biofuels are normally a blend of fossil fuel and oil made from plants or vegetables.

The fact that these crops can be re-grown and soak up more CO2 means they cancel out the carbon emitted when used in engines.

Soy and palm oil were once widely used as components of biodiesel but this practice has been widely discredited because it encourages deforestation.

So for the last decade or so, the use of used cooking oil has expanded massively as an alternative feedstock for fuel.

Chip fat and other waste oils have become a key component of biodiesel with an effective industry springing up across Europe to collect and process the product.

But with the amount of biodiesel made from UCO increasing by around 40% every year since 2014, there simply isn’t enough chip fat to go around.

According to a report from the campaign group Transport & Environment, more than half of the UCO used in Europe is imported.

Their study suggests this is highly problematic when it comes to impacts on the environment.

While UCO is considered a waste material in the UK, in China, Indonesia and Malaysia it has long been used to feed animals. The report raises the question of what people in these countries are replacing the UCO with, when it is exported.

In 2019, Malaysia exported 90 million litres of UCO to the UK and Ireland. Figures for their exports to other European countries aren’t available but the flow of UCO is likely to be similar.

With a population of around 33 million, that’s close to three litres per head of used oil that’s collected and exported to the UK and Ireland alone.

By comparison, Thailand, which has a population of 70 million people, managed to collect around five million litres of UCO in 2019.

“Because we are buying it, they have less used cooking oil to use on the things that they were previously using it for,” said Greg Archer with Transport & Environment.

Another major problem with UCO is the suspicion of fraud.

Because of demand from Europe, the price of UCO is often higher than palm oil. The worry is that some unscrupulous traders are simply diluting shipments of UCO with palm.

As oils of different types are mixed in bulk for transport, and no testing of the materials is carried out, some experts believe fraud is rife.

The suggestion of fraud anywhere along the chain of supply is rejected by the European Waste-to-Advanced Biofuels Association (EWABA), who say there are robust certification schemes in place.

He says a new database being developed by the EU will ensure that trading, certification and sustainability data on all bio-liquids will have to registered.

“The combination of revised certification schemes and the pan-EU track and trace database will ensure that no sustainability issues arise in the whole biofuels and bio-liquids supply chain,” he told BBC News.

Others in the field are concerned that the database idea, which was first mooted in 2018, may not be effective in stemming suspected fraud.

The report from Transport & Environment points out that with shipping and aviation looking to decarbonise by using biofuels, demand for UCO could double over the next decade.

“Rising the demand beyond sustainable supply levels would increase these concerns, and risks of using ‘fake’ UCO, potentially leading to indirect impacts such as deforestation.”