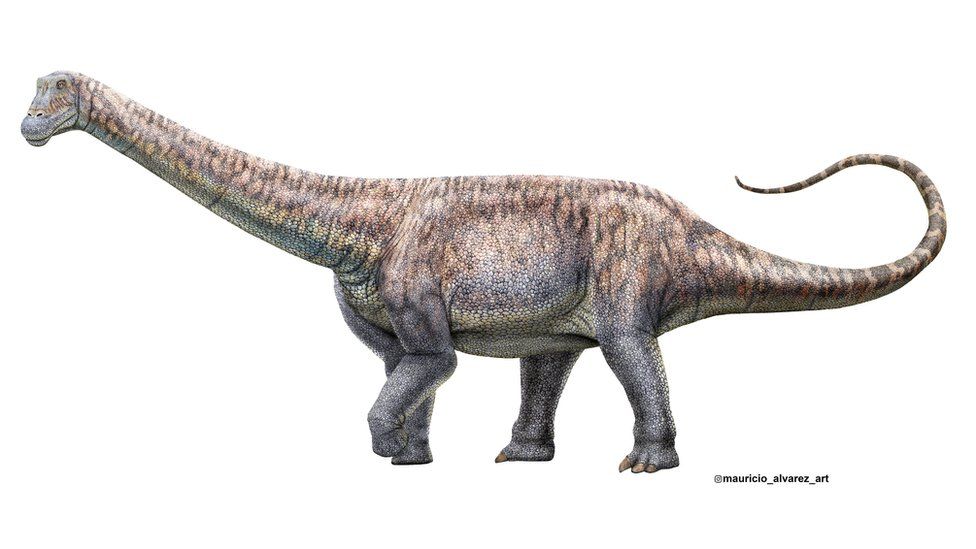 Scientists have identified a new species of dinosaur from parts of a skeleton found in northern Chile.

The creature’s remains were unearthed in the Atacama desert – the world’s driest – near the city of Copiapó.

Experts say the plant-eating titanosaur had a small head and long neck, and an unusually flat back.

Studies suggest the creature lived in what would then have been a lush landscape of flowering plants, ferns and palm trees.

A team led by Chilean geologist Carlos Arévalo unearthed the remains in the 1990s and carried out research in the 2000s. The findings, published in the journal Cretaceous Research, were made public on Monday.

The remains, according to the team, included parts of a humerus, a femur and the ischium, and vertebral elements of the neck and back. They represent a small sub-adult individual, with an estimated length of 6.3m (20ft).

The creature was a sauropod, or a long-necked, long-tailed, plant-eating dinosaur. It was found in beds dating from the Late Cretaceous, the last epoch before dinosaurs were wiped out 66 million years ago.

The creature has been named Arackar licanantay, which means Atacama bones in the indigenous Kunza language.

The remains will eventually be exhibited in Chile’s Museum of Natural History. The head of the museum’s palaeontology area, David Rubilar, said: “This represents a relevant milestone for the Chilean palaeontological heritage.”

This is the third dinosaur named from Chile and the third titanosaur from the western side of the Andes in South America, the team said. In 2014, one of biggest dinosaurs ever discovered was unearthed in Argentina, also a titanosaur whose estimated length was more than 37m.