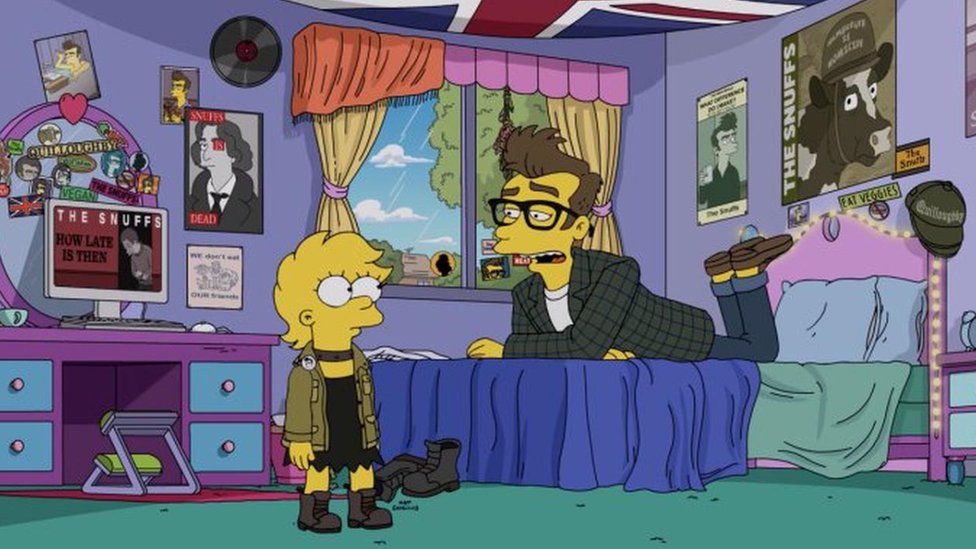 Morrissey has accused The Simpsons of “hatred” and “complete ignorance” after he was parodied in a recent episode.

In a letter on his website, the star called the show “a taunting lawsuit” but said he did not have the money to fund a legal action.

The episode, which aired in the US on Sunday, revolved around a vegan British indie singer, called Quilloughby.

After Lisa Simpson fell in love with his ideals, he was revealed to be a meat-eating, overweight xenophobe.

In a scene towards the end of the episode, he is seen at a festival eating a pastrami sandwich and firing sausages into the audience, saying he stopped being vegan when he discovered it was “invented by foreigners”.

The makers of the show have said they will not respond to Morrissey’s criticism.

However, the episode’s writer has said the character of Quilloughby was a composite of several 80s singers, including Morrissey, Robert Smith of The Cure and Ian Curtis from Joy Division.

Morrissey’s manager, Peter Katsis, was unsatisfied with that explanation.

“The Simpsons are claiming it’s a composite of several artists – obviously so we don’t sue them,” he told Rolling Stone magazine.

“What no one’s talking about is how insulting it truly is. The guy is still a super vegan. His beliefs in animal rights is what’s got him to this point.”

In his letter, Morrissey noted that he didn’t have “a determined business squad of legal practitioners ready to pounce,” adding, “I think this is generally understood and is the reason why I am so carelessly and noisily attacked”.

“You are especially despised if your music affects people in a strong and beautiful way, since music is no longer required to. In fact, the worst thing you can do in 2021 is to lend a bit of strength to the lives of others. There is no place in modern music for anyone with strong emotions.”

He later addressed his treatment by the press, saying, “I’ve had enough horror thrown at me that would kill off a herd of bison”.

“I have lost several high-profile friends because they could no longer live with the night and day harassment from British journalists who are suicidally anguished because they cannot urge the people around me to drum up tell-tale incidents of racism,” he added.

The singer went on to say that his vilification in the press was the source material upon which “The Simpsons’ latest episode feasts”.

Morrissey’s manager was the first to comment on the show on Monday, calling its depiction of the star “hurtful and racist”.

“Poking fun at subjects is one thing,” he wrote on Facebook, “but when a show stoops so low to use harshly hateful tactics like showing the Morrissey character with his belly hanging out of his shirt (when he has never looked like that at any point in his career) makes you wonder who the real hurtful, racist group is here.

“Even worse – calling the Morrissey character out for being a racist, without pointing out any specific instances, offers nothing. It only serves to insult the artist.”

In a follow-up statement on Monday night, Katsis asked why Benedict Cumberbatch had agreed to voice the “Morrissey character”.

“Could he be that hard up for cash that he would agree to bad rap another artist that harshly?” he posted on Facebook.

“Clearly he would have read the outline or script before he took the gig. Maybe he should speak up and tell his side of this. Does he even have enough balls to do that?”

Morrissey rose to fame as the poetically-tortured lead singer of 80s indie band The Smiths. However, in recent years, he has frequently been criticised for his outspoken and controversial views.

He has called halal meat “evil”, accused London Mayor Sadiq Khan of being unable to “talk properly” and appeared to defend actor Kevin Spacey over allegations of sexual abuse.

The singer has also expressed support for the far-right For Britain party, wearing a badge with its logo on during a US TV performance.

He has consistently denied accusations of racism. In Monday’s letter, he insisted “the world in general has become a mesmerising mess” and that “free speech no longer exists”.

Prior to The Simpsons’ parody being broadcast in the US, promotional images were posted on Morrissey’s Facebook page and official website.

The episode, titled Panic On The Streets Of Springfield (itself a reference to The Smiths’ song Panic) has yet to be broadcast in the UK. It is expected to premiere on Sky One next month.